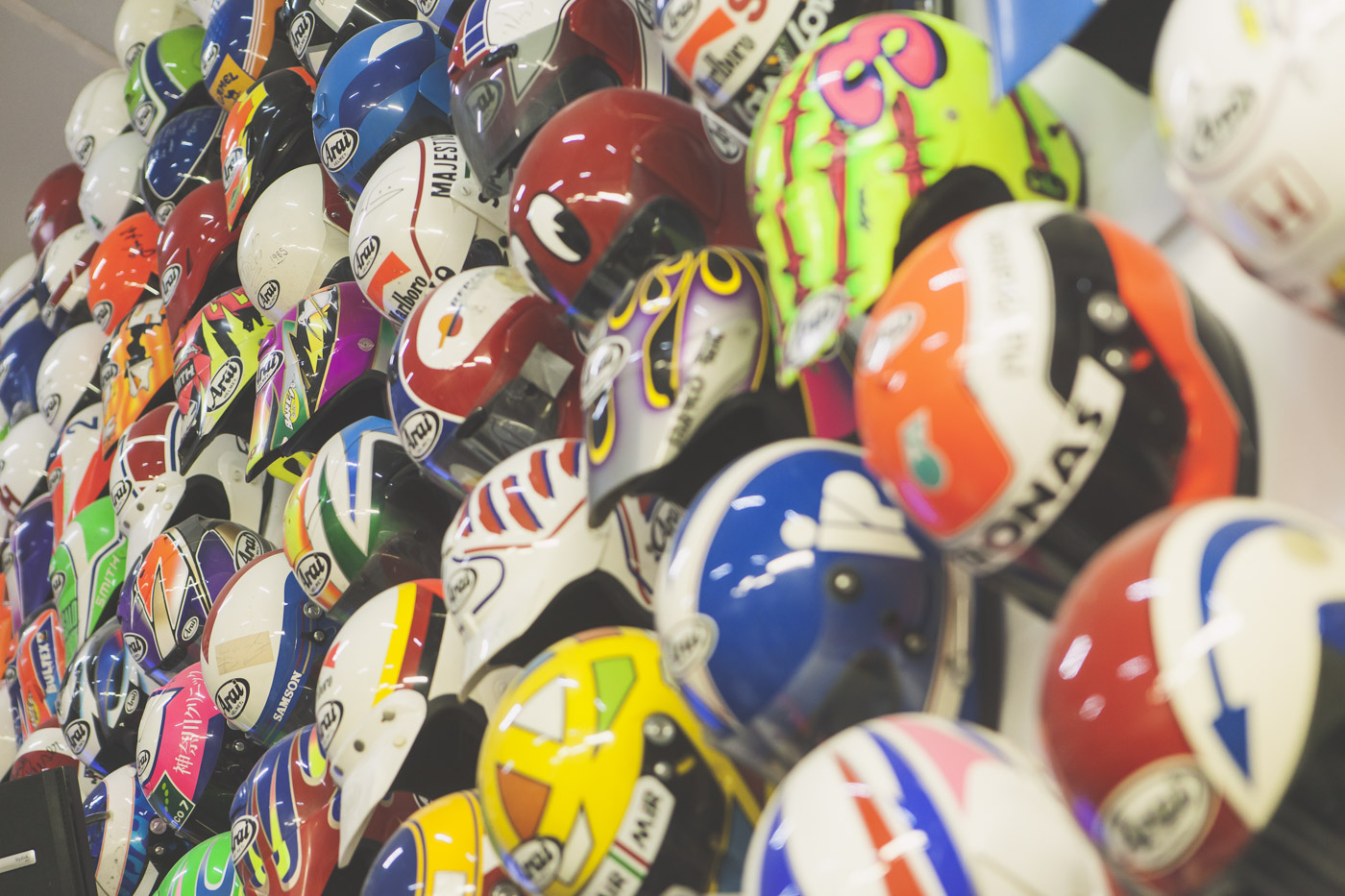 Feature – Inside your helmet

The difference between a £50 helmet and a £300+ Arai, Shoei or Shark is one of the true mysteries in motorcycling. Whilst parts upgrades, tyres, knee braces and boots can all be tested by journalists and consumers purely through feeling and experience, with helmets it’s simply not the case: that is unless you wish to smash your head into the ground at 50mph and see which one leaves you with more brain damage. Arai Europe invited us the Arai Inspiration Centre in Holland, a testing facility used for dealer training, to provide some steadfast insight into their design and testing process and their own philosophy on what makes a helmet good.

The Difference
The logic for wearing cheaper helmets generally makes sense.  After all, why spend hundreds of pounds on something that’ll be wrecked the first time you hit the deck? Surely Carbon Kevlar and Polystyrene is just that? The answer is pretty simple – material and science.  According to the fine folks at Arai, the major standout to cheap helmets is the lack of science in the expanded polystyrene lining (EPS) and more importantly the lack of material mass making up the shell. Skimping on this is the easiest way to make helmets cheaper and lighter, so that’s what they do. The shell of the helmet is paramount to its ability to stop your head taking the brunt of any impact; if you didn’t need it we’d all cruise around with pure polystyrene strapped to our heads.

Watching a 3.5kg metal spike drop into a vent hole goes someway to convincing you that an Arai is probably a little better at stopping that impact than that plastic helmet you bought from Costco

Arai stand out from the pack on several key issues and are rather vocal in their opinions. Hard, round and smooth underlie the design of every single Arai crash helmet made since the company’s birth. If you look at an Arai, the design is simplistic, there are no protrusions from the body of the helmet and all the venting ducts and peripherals are plastic meaning they will break off if you sneeze too hard near them.  Arai champion an idea called the R75 shape, which states that the shell should maintain a continuously round shape with a minimum radius of 75mm.

The principle behind this, is that in the event of a crash, a smooth, hard helmet will allow your head glance off things, maintaining it’s natural trajectory and therefore reducing the force your skull takes. Having a hard shell also greatly increases puncture prevention, so when you smash into a sharp object it won’t become lodged in your skull.

To compensate for the extreme hardness of their shells, Arai use a very soft EPS liner, made up of multiple densities, a little trick that Arai own the worldwide patent on. most brands glue together multiple layers of different density EPS, where as Arai have the ability to create and bond multiple progressive densities in the same unit.

While principles and theories all make for wonderful sales pitches, how do you go about proving such things? The Arai way is to smash hard objects into their helmets for us to watch in amazement. Watching a 3.5kg metal spike drop into a vent hole goes someway to convincing you that an Arai is probably a little better at stopping that impact than that plastic helmet you bought from Costco, along with your toilet paper.

After replicating several of the tests from the SNELL, DOT and EC test, the Arai had held up remarkably well, external damage was present but far from horrific. Checking the EPS foam inside revealed that it has done the majority of the impact reduction with large head shaped creases present inside. It’s hard to express just how strong an Arai shell is, they have almost no flex to them and to break through is going to need an impact that is scary to think about – in fact they are quite happy let a 100kg man stand on an unfinished shell with a person’s head inside. That’s a strange thing to picture, but everyone came out unscathed and Arai’s sales pitch got a little points boost.

In actuality, the most impressive aspect of their demonstration was not how strong their helmets are, the detailed hand made construction or their strong principles; but the logic, reasoning and thought that appears to have gone into their helmet design. No question went un-answered without a very sensible, logical and understandable answer. That is a very reassuring situation. Arai haven’t just gone out and paid someone for a helmet out of a far eastern factory – they’ve designed, tested and put 30 years of ideology into it. Everything appears to have been thought of, from the carefully designed chin bar with built in flex zones, to the optimum vent hole size for the perfect safety to airflow ratio. If you’ve got a question, they have the answer. And again, watching a solid metal, 3.5kg spike drop into a vent hole with virtually no damage is pretty convincing.

The Perspective
I’m most definitely not a scientist, I don’t work in a helmet-testing lab and so I have no right to pass opinion on the safety of a helmet. The Arai presentation made a lot of sense, but for Joe Public it actually doesn’t help all that much. After all it is a sales pitch and there are numerous other reputable brands in existence with very different ideas on what makes a safe helmet.

In fact Arai almost sit on their own with many of their helmet design principles. Many brands and in fact, other sports question the theory of a extremely hard outer shell, feeling that the shell, while protecting, should also be absorbing.

While a light helmet may feel great on your neck, less strength equalled more penetrability and that doesn’t fit with the Arai principle

Helmet design is very much a matter of principle and theory. Shark have an entirely different theory to their design. Shoei too. It’s the reason MX helmets are different from road helmets in coverage, construction and weight. It’s the reason Arai refused to use a solid chin bar for a decade after everyone else on their dirt helmets, why Bell have a developed a two part EPS liner for their MX and mountain bike helmets and not their road one.

Arai didn’t have an issue with other peoples theories, they embraced it. They believe what they believe, but there were several key points that they made clear are paramount to producing a safe helmet regardless. Firstly, plastic helmets are doing very little to protect your head in a crash. The biggest problem with plastic is the consistency and the outright strength. A plastic helmet has great absorption properties at 5mph, but it’ll perform entirely different at 0°C to 30°C and it has the impact protection of a shopping bag.

Their second point was, for a helmet to be light, it must use less material in the shell. While a light helmet may feel great on your neck, less strength equalled more penetrability and that doesn’t fit with the Arai principle. If you look at almost all of the top range helmets from big name brands, they’re not far off the same weight.

The final point, above all, was that helmets from companies with theories on helmet safety, wether they’re in line with the legendary Japanese marque or not, was that at least they’re thinking about it and trying to make a safe helmet, that the helmet isn’t just something pumped out of un heard of factory because it looked good.

But surely if it’s got a DOT, SNELL or EC sticker it’s safe? Well, Arai don’t believe this, especially of the EC standard ECE 22-05.  They simply do not believe that the helmet testing is thorough enough and that it’s easy to design a helmet to pass – and still cut corners on safety. That said, the SNELL test, in their opinion is somewhat closer to where helmet testing should be. Again, this is a little more hotly debated than you’d think, one side has the ECE 22-05 as the most forward thinking with the other side of the argument claiming that all current helmet safety test are based on dated science and information and that to pass SNELL requires a helmet to be ‘too hard’.

So what should you take from all this? Well you can read an interesting, if slightly anti-SNELL biased feature here on the testing processes and engage in a little ponderation but really, we are in the hands of the folk who make our protection. What we did learn from our trip to Holland was buying a reputable brand helmet, that is not made of plastic and fits you properly is what you should be paying attention too most.

So next time you’re looking at the shelf wondering, try some helmets on, worry more about those three points rather than wether it weighs 50 grams less than the other one and embrace the notion that the companies who build your helmets are actually putting some R&D into their designs. Safe riding.

Helmets are surrounded by myths that cloud ownership and rules that have been around for longer than helmets themselves. Here are some of the bigger ones the Arai team were happy to shed light on.

Dropping my helmet will ruin it…

This is, according to Arai, simply not true of their products (and I assume any other good quality helmet). Dropping a helmet from your handlebar, or any other similar height may damage the paint and add some scratches, but real damage will not occur.

You can only use a helmet for three years…

In the UK it was once a national rule that a helmet may not be more than three years old as it would no longer do the job. Arai say ten years for their helmets is a realistic time-frame for a helmet, providing you haven’t been playing head tennis with the ground.

Painting your helmet will ruin it…

Again, not true. If you choose to use a plastic helmet, then you may well have an issue, but the materials used to make any non-plastic helmet are unaffected by custom painting.

Again, this isn’t strictly true. Arai’s EPS liner, like quite a few other brands, is painted black, so it’s relatively easy to see if the helmet has suffered damage, crease lines or white creases in the foam mean she’s taken a battering at some point. For a proper analysis you can return it to Arai for inspection, but chances are that if your EPS liner has signs of damage, your helmets done it’s job and you should be thankful. Sadly it probably also means you need a new one, EPS doesn’t return to shape and more importantly, once compressed won’t offer the same protection any more.