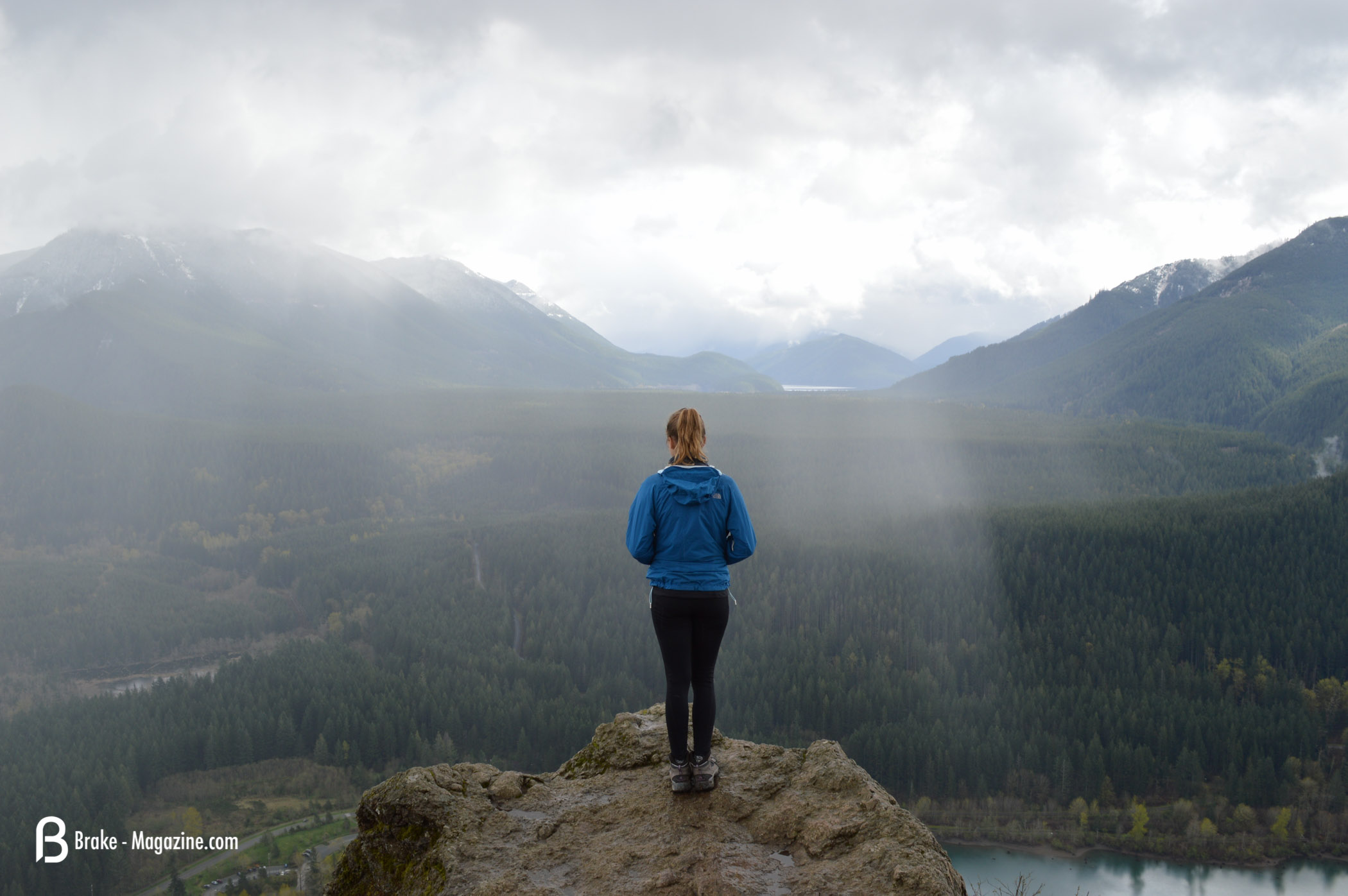 Georgia Melville
Contributor
At just 22, Georgia Melville is embracing the motorcycle adventure travel early in life. Scottish born, Australia raised, Georgia has a big love of the outdoors, a perpetual smile and endless enthusiasm for travelling and riding.

Young, blonde, female and travelling by bike. What is it like to explore Europe and North Africa as someone who clearly stands out? Inspired by Lois Pryce and Linda Bick, Georgia Melville bought a knackered F 650 GS and set about creating her own memories.

I’m sat roadside with a gaggle of truckers in the heart of Morocco. I sip my clean, refreshing, mint tea when a thought about personal safety flashes through my mind for first time in months.  I’m 22, female and travelling alone in North Africa.

At this point I’ve bumbled my way from central Scotland to the searing heat of summer time North Africa. It’s been an incredible journey made all the better by some of the most amazing people who’ve taught me a great many life lessons. I have been blown away by the hospitality of people, especially those who have very little and are willing to give everything.

Until this moment, thoughts of my own safety had barely flittered through my mind. I can’t pinpoint what gave birth to the deliberations but they created a wave of thought process in me.

Prior to leaving Australia almost all my friends and family cautioned me on solo travel. “It’s dangerous, you shouldn’t go by yourself.”

Would I have stopped for mint tea with truckers if I was travelling in a posse?

Now they are right to be cautious. It’s nice too, it shows compassion but ultimately it highlights a bigger problem. The perception and basis for opinion is entirely formed by world media with its wholeheartedly negative portrayal of foreign lands and the dangers of travelling alone. We hear countless stories of disappearances, kidnappings and hostage situations. The next thousand words are from my experiences to provide some to balance the argument.

I am far from a veteran of international motorcycle travel, but my short career of exploration alone has been an incredibly rewarding and developmental experience.

The freedom of solo travel is the absolute best part. I can skip to my beat, stop when I want to stop, change my plans at the drop of a hat and that fluidity is intoxicating. Would I have stopped for mint tea with truckers if I was travelling in a posse? Being able to alter my route on a whim was a great feeling especially when I stumbled into places I had little desire to leave. It really doesn’t matter how much researching, googling or guide book reading you do, locals know the best spots and travelling on my own created opportunities to engage that are less easily found with multiple people.

Group travel, while it has benefits, can also be stifling. It’s more restrictive. There is often the feeling that you must push on and keep moving. The ability of the solo traveller to stop wherever, without affecting anyone else is a huge bonus.

I must’ve posed for thousands of local’s selfies. What they do with them is a mystery.

The Pyrenees were incredibly beautiful. We don’t have scenery of that ilk in Australia. I pulled over for a photo (helmet and gloves off, camera out) every 50 metres for an age. I couldn’t absorb the beauty in front of my eyes. It’s that mammoth freedom to engage with the aspects of an environment that intrigue me the most. That is truly unique.

The response of local people as a lone female motorcycle traveller is very distinctive. The majority of the time, regardless of location, people want to engage with and learn about you. I must’ve posed for thousands of local’s selfies. What they do with them is a mystery. It is a lovely feeling when people are happy that you are in their environment, enjoying and exploring the place they call home. People are often extremely proud of what they’ve got and are keen to tell anyone who’ll listen about their favourite spots.

I found that people always wanted to know where my boyfriend or husband was and were generally shocked by my answer. I noticed a natural, protective instinct from almost everyone I met. It took me by surprise and was incredibly humbling.

Some of the finest experiences I had, especially in Morocco, were playing with the children who line the streets hawking wares. Their innocence and happiness is wholly engaging, they’re excited by new people, new things and life in general.

I loved having them sit on my bike and taking photos with them. In one instance I saw a little girl on the side of the road. I stoped to say hi and we played for 20 minutes. I whipped out my camera phone and she saw her own reflection. She kept saying “C’est moi? C’est moi?”. It amazed me to meet a child of 5 or 6 had never seen her own face. It was an amazing pleasure to share that time with her. It’s a memory I’ll keep forever.

I don’t know if travelling solo or being female presented me these opportunities but I feel it created unique situations for me to engage with.

So what precautions did I take? Well, after reading almost any adventure motorcycle book I could get my mitts on I did decided to take a few important steps.

Firstly, I dyed my hair from blonde to brown. The reason for this was to draw less attention, especially in North Africa. Blonde is not a regular hair colour in that part of the world. I travelled through Indonesia previously and ladies would come to me just to stroke my hair. It was hilarious but I decided I’d had enough of being petted and the blonde had to go.

Secondly, I stuck to the local clothing guidelines in Morocco. Covering up wrists and ankles is main crux of this. Most of the time I had my riding kit on but for roaming the streets of Fes or Casablanca I covered up despite the heat.

I had no real issue in Morocco with being a female. Some of the time I would be ignored and other times men would be chasing me out the shop trying to give me free bits and pieces from their collections. All the advice I came across states you shouldn’t wander around as a female in the streets as being alone depicts a certain stereotype thus encouraging offers from men. I found taking a guide or getting together with other travellers worked really well and was never really put into a position where I was alone.

Another tip that I picked up from somewhere was to wear a nice ring on my wedding finger.  This worked really well the few times I found myself in situations where I had to fake that my husband was only around the corner. When I was proposed to I was able to gently decline as I was “married” already. One thing that I wasn’t expecting is when I changed my ring back to my right hand, in some countries the right hand is where the wedding ring goes… Every day’s a school day!

After my hot lap around Morocco, I started to run out of time and began the long haul back to sunny Scotland. I had not far left the continent when my bike broke down due to lack of maintenance.

These are the times when you wish you weren’t travelling alone. Having another bike with spare parts or another person to help when the shit hits the proverbial fan is definitely one of the downsides to roaming solo. Especially if like me, you lack any serious mechanical knowledge. Luckily though, if you’re a female and stood on the roadside alone like a scene out of The Cannonball Run, someone generally stops to help out. I found this on countless occasions. Every time something went wrong and I thought my trip was over, someone would appear out of nowhere like an angel, help me fix my bike and refuse any sort of payment of gratitude.

My trip showed me that people all over the world are absolutely incredibly helpful, kind souls and it’s not until you travel that you really see how unbalanced opinion and media perception can be. To be stuck in the middle of nowhere, helpless, is an extremely intimidating situation but very few positions are truly lacking hope and that is important to remember.

Life starts at the end of your comfort zone, mine certainly has. This is where you really connect with the people around you. Some of the best memories I have of previous trips are when times got tough and I had to fight my way out of a seemingly impossible situation. They are the stories we take with us, the ones we remember and regale to friends and family.

Returning into France from Spain I realised that I was taking the very same road through Andorra I had taken on the journey south. I popped over a peak and screamed with joy in my helmet. I had hit the snow-capped mountains of the Pyrenees; the first time I had seen snow in far too long. I was so excited. They were entirely breathtaking and it’s one of the most memorable moments of my trip. I will always hold this memory close to me but there is a lagging feeling that memory would’ve been better shared. It is incredible to be fortunate enough to travel but sometimes it is nice to be able to share the special moments with someone.

My experience travelling alone as a female was entirely positive. Travelling solo is not for everyone, especially if you have a partner who is just as keen travel by bike, but there are definitely things that you can gain by both going alone or together.

If you have ever had that little inkling to break free from your other half or that best mate you always go riding with and venture out into the unknown, I can say for sure that you will never regret it. Always do your research but don’t let anything stand in your way if you really want to visit somewhere. Being female and travelling alone is not as dangerous as the world would have you believe. People around the globe are friendly and the experience, the stories, the knowledge about yourself and the world you gain will grow you like nothing else can. And remember, well behaved women rarely make history.