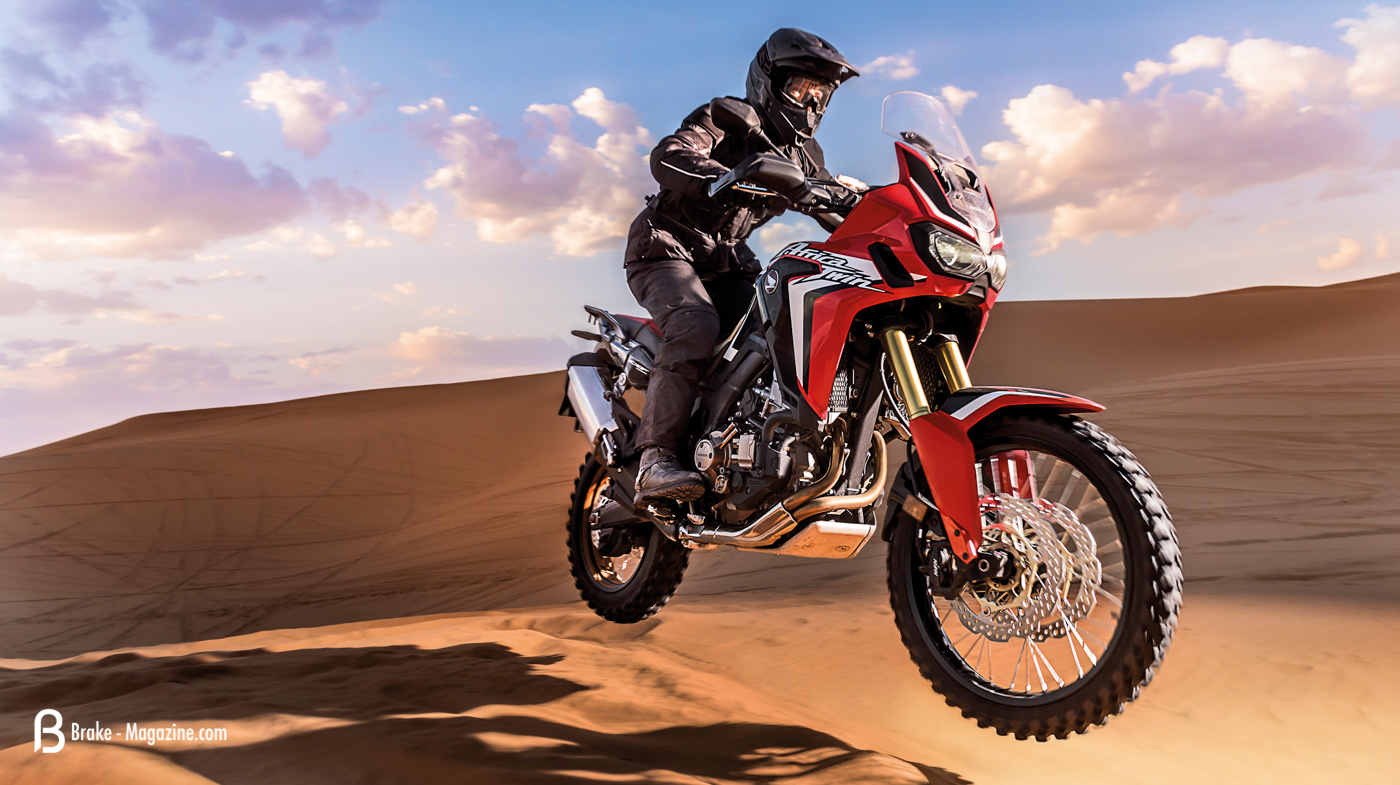 Feature – Will the Africa Twin be any good?

Well, in the ADV world it’s been an exciting few days. Someone in the Honda marketing department is certainly getting a raise. As accidental leaks go, the Japanese marque has managed two Africa Twin centric rippers during the last few months and bloody hell, they’ve gone savagely viral. Conspiracy theories aside, the new Africa Twin has taken both praise and heavy flak in all departments, so we thought it’d be work poking through the available info and giving our, balanced and knowledge-based* opinion.

In recent times we don’t think we’ve seen a bike so heavily split opinions. It’s been a rollercoaster of dramatic, truly internet level statements across all forms of social media, both praising and maligning the Africa Twin before a single, non-Honda employee human has ever ridden it. Everything from “it’s too heavy” to “it’s got no power”, and the intelligently worded “what a shit bike” has been thrown down. On the flip side the bike has more than its fair share of fans.

The history, the base love of all things Honda and the fact the new model has broken cover as a pretty damn sexy bike have all helped and hindered in equal measures. So, when we watch the video, pull the spec sheets a little closer and study the images, what do we see?

The first point of serious note, is the change in Honda’s attitudes toward leisure motorcycles in the last four years. Point in case, MotoGP, Dakar and an enormous push and resurgence in World Motocross (not to mention Trials). They’re pushing off-road, pushing the brand in new markets and pushing development. Of that you cannot question. Dakar has undoubtedly been at the forefront of that and hasn’t come cheap, rumours of €30 Mil mark are common and the technology in that CRF Rally machine is unrivalled.

That development must be headed somewhere and it’s reasonable to assume the project has fed the Africa Twin we currently look at. On top of that the unique marketing exercise that is the RC213-VS sportsbike is on sale this year too and although woefully out of reach of 99 per cent of motorcyclists’ bank accounts, it does strike a chord – Honda is making a come back.

The Africa Twin is by all accounts a highly regarded model within Honda. Iconic is used too often but it might just be true here. The original model was, after all, a pure race-replica having been developed out from the mid-80s Dakar-winning NXR750. It featured all the right colours, all the right HRC stickers (one of few Hondas to be donned with the official development arm of the Japanese manufacturer.)

Some of the most brutal internet comments have fallen to the ‘weighty’, ‘underpowered’ 1000cc parallel twin and the automatic gearbox-driven version that sits at the heart of the AT. We aren’t quite sure what the press info means when it says ‘CRF 450 derived’, maybe it’s the Unicam design, or maybe it means the thing revs to the moon with smooth punchy power? Maybe it’s all to do with some floury marketing filler? One thing is for sure, 93 BHP is not and never will be under-powered. When was the last time anyone road a bike that powerful off-road and decided that they really could’ve done with more? There is a reason KTM restrict the 1190 and 1290 in Enduro mode. We’ve done a lot of riding here at Brake, we even consider ourselves more than handy off-road too, so trust us when we say, those wheelies looked pretty effortless and we’d bet the engine is helping with that a lot.

The most prominent parallel twin of recent times is BMW’s F 800 GS and, if that’s anything to go by the engine configuration is a positive. It’s a free-flowing, zesty motor with some punch, smooth delivery and an enjoyable ride. It’s made us like the idea of two cylinders next to each other. The one obvious difference between the German machine and the Honda is that throaty roar played over the top of the video. Hot damn, it sounds smoother than a fresh jar of skippy.

DCT is also a significant point worthy of discussion. Honestly, we’re more than sceptical. But we’ve also learnt some harsh lessons about our scepticism over the last few years. A mere three years ago we sat in the same position, brutally declaring it impossible for ABS to work off-road and that traction control was scientifically and effectively unachievable. Anyone who has ridden a KTM or BMW produced since 2013 will know that we couldn’t have been more wrong. That is exactly why DCT COULD be a huge leap into something new and amazing. And really, if it’s crap, or your mind doesn’t open in that direction then you don’t have to buy it.

Firstly, can we have a round of applause for the 21/18 inch wheel combination please? Without doubt, every bike with this combo is better off-road than the same machine without it. It’s science determined by 50 years of off-road motorcycle development. Plus the tyre options stretch to include a whole host of dirt friendly rubber. The grip is gonna be better, it’ll handle better; both of those are great assets.

We can only speculate from the spec sheet, but when you combine that with the video footage we have all seen (if you haven’t watched it, click the video tab), we feel it’s a pretty good indicator of things to come. While the test riders are undoubtedly handy pilots, when was the last time you saw someone huck a jump that big, with that much composure on a big ADV bike?  It’s like a majestic eagle. A thing of beauty. We got rather excited.

Does that few seconds of flying motorcycle mean the CRF1000L is going to be amazing? No. Not in slightest. That could be far better than stock suspension, it could be great camera work. It could just be world class riders on an average bike on a perfectly shaped lump of dirt, but we can live in hope.

Now don’t get us wrong about this either, it is still a big bike. A kerb weight of 228kg for the standard, non-fancy model is hefty. It’s F 800 GS sized and on paper sits as a pretty close competitor to the BMW. That BMW happens to be pretty damn good off-road so a Honda version with a friendlier, more powerful, more torquey motor, topped off with improved suspension and a slightly lower seat high doesn’t really sound so bad does it?

It’s got decent ground clearance, the right size brakes, spoked wheels and good middle-ground 18l fuel tank. Honda are already claiming a decent 400km+ fuel range. For the Supermoto fans amongst us, it’s got a slipper clutch too. What does that mean? It means backing-in photos on the tarmac people. Oh, and it’ll make things nicer on deceleration.

When you think of Japanese bikes you think reliable, powerful, neutral handling and well built. When you think Honda you add in Nissin brakes and Showa suspension too. But clever, science-defying electronics? Honda don’t do that do they? Amazing ABS, dirt capable traction control or anything vaguely switchable? Hmmm.

Except now they claim they do. Honda Selectable Torque Control (HSTC or more commonly traction control) with different modes is a huge indicator of just how seriously they’re taking this and how much development has gone into it. Making ABS they claim is off-road worthy is equally as a big of a leap. Even if you couldn’t give a damn about it and just want a traditional bike, these little details are the indicators that the CRF1000L is a serious world-munching weapon. Honda have a lifelong habit of not going near something until it’s really good. Well that or making something seriously boring. We’re putting our proverbial eggs in the ‘good’ basket.

On paper, taking the DCT model in the far flung reaches of Mongolia seems like a terrible idea. It’s unproven off-road, it’s relatively new and frankly, it’s a complex system that could be difficult to fix. All of a sudden I’ve joined the anti-tech ranks.

But come on, it’s automatic! Is this model really aimed at the hardened world traveller? Honestly, we can see this being aimed more toward the road market, especially with it’s ‘Lever-Lock Type Parking Brake System’. Besides, until it’s tested we won’t really know.

This is where we think Honda have really smashed the ball out of the metaphorical ballpark. Their Dakar bike is easily one of the most gorgeous bikes to ever grace the desert racing scene and new Africa Twin, channeling the original classic mashed with the 450 Rally makes for a bike that should get anyone with blood in their veins hot under the collar.

The balance to the argument

It’s safe to say, we’ve gushed about the potential of the new Africa Twin. It’s got us excited. The video does a brilliant job of making the bike look fantastically capable; in essence the marketing department have done well.

Up until the release of said video we’d been relatively despondent about the bike and with fair reason. Honda have developed a reputation in the last ten years. It’s not exactly undeserved either. Honda dropped the ball. The recession came hard and Honda put their focus into the sale of 13 million scooters and Civic’s with diesel engines. Dirt bikes, travel bikes and off-road racing were no longer of economical interest. As such, development slowed and simultaneously Honda spawned an ethos along the lines of; ‘Smooth and gentle is easy to ride and safe’. To which we cried a loud and uniform “Boring!”

What no one told Honda is that smooth and safe doesn’t need to be boring. You can make smooth, safe and amazing handling bikes without making a machine more bland than porridge made with water. And that’s easily our biggest fear with the Africa Twin, that Honda will take a great opportunity and sterilise it, remove any character and make the most neutral bike they possibly could.

Even if they do that, they’ll sell loads, people will travel to work on them, they’ll even travel the globe on them, but for those that ride adventure bikes in search of finding the most fun riding, they’ll be left without the Honda they’ve been dreaming of. That’d be a huge shame, but at least they’re taking the adventure travel segment seriously now. Maybe it’ll spark Kawasaki into life too. Fingers crossed Honda have come up with something that’s truly worthy of the iconic wing.

To view Honda’s page for the Africa Twin click here.