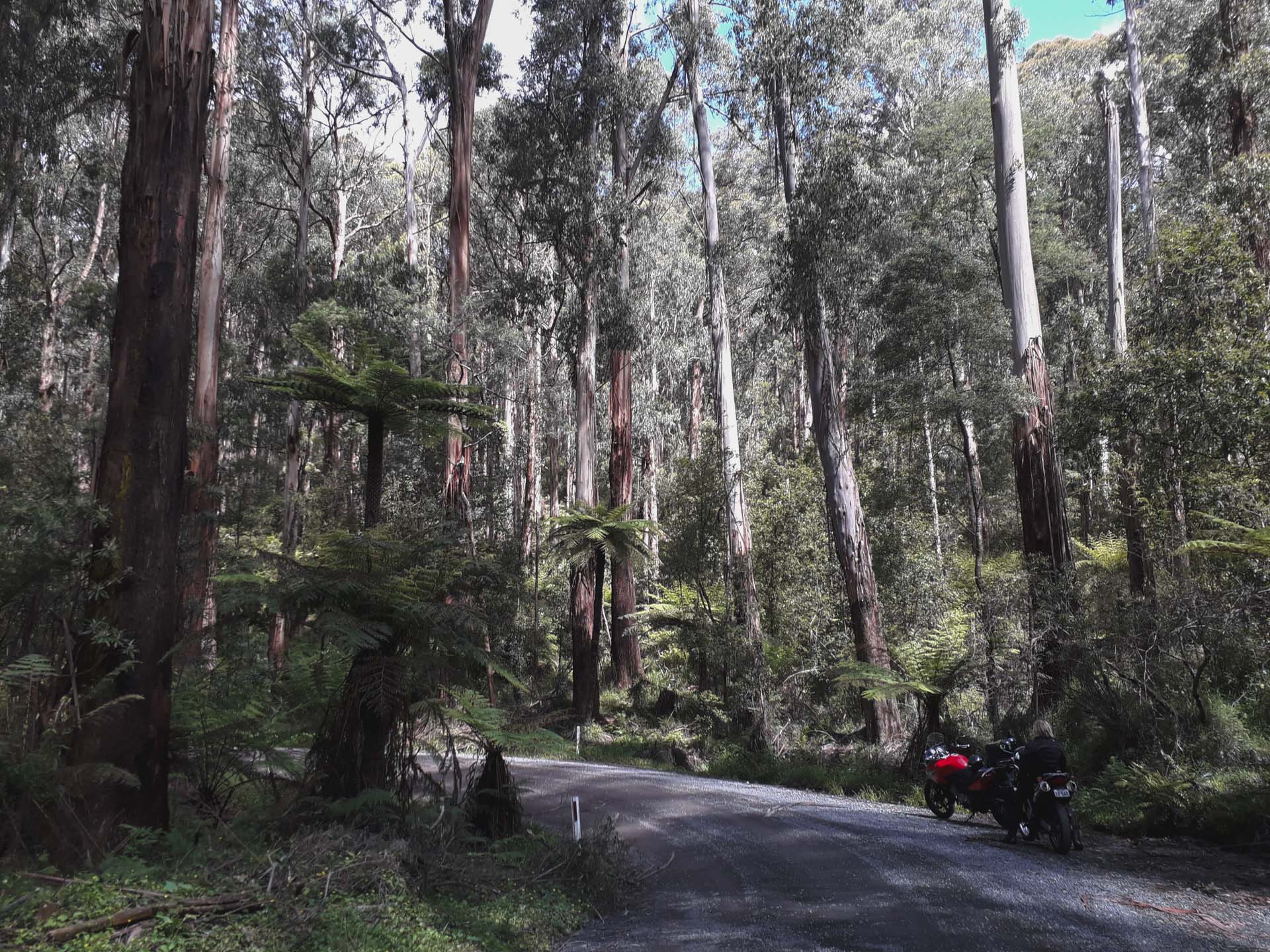 Finding an Adventure in Melbourne

Reader, watcher and Aussie native Jim Cairndruff is a Melbourne native with a passion for riding, travelling and old stuff. Late last year he took a quick ride into the bush around Melbourne and found a little adventure than he was looking for.

here aren’t many big cities in the world where you can be in the hills and riding dirt within 30 minutes. In Melbourne you can and it’s spectacular. We were on our way into the city by train to collect our two rental bikes from Ride Australia, marveling at the beautiful homes and counting down the stations; Ringwood, Mitchum, Blackburn, Box Hill, Surrey Hills, Camberwell, Hawthorn, Burnley and finally ours, Richmond. Sound familiar don’t they?

Walk anywhere in Melbourne and you’ll be surrounded by a café or three. They’re all bloody good, but the trick is to pick the one that’s better than the one you’ve just past. No one wants to back track for a café. We chose a French one in name and baking. We knocked back a couple of unreasonably oversized Tarte aux Fruits and exceptionally hipster coffee’s laid out in jam jars.

Strolling into the Ride Australia Rental office was fascinating. They stock a pretty impressive selection, including some roughies; exactly what we’d asked for. Trev met us at the door with a handshake and a ‘You must be Jim and Liz, these are your bikes.’ Before us sat a not too shabby V-Strom 650 and an F 650 GS. He acknowledged my face drop at the V-Strom before explaining how the previous punter had fitted the wrong headlight bulb and melted the whole unit on our originally ordered, second F 650 GS.

My partner Lizzie is pretty fresh to riding. She’d recently passed her test and been tutored in the dirt by our man Llel. I was confident in her abilities but she was understandably dubious about Melbourne’s hectic trams, slippery tram lines and the headache turn right to go left system. The main concern was the light sun shower making the polished metal deadly. The key is to stay away from the tracks and try to cross with as much angle as possible. Oh, and definitely don’t pass a stopped tram. That can get expensive on the wallet.

Navigating through the tram and shop mecca of Kew, we turned onto the Eastern Freeway. From the centre of town to the base of Mt Dandenong in the leafy outer suburb of Montrose took precisely 30 minutes. You can Google this, it’s unbelievable. A righty onto The Old Coach Road and you’re on the dirt and into the bush. While the surface is pretty easy, it’s steeper than it looks and if you get it wrong, you may not come back. Back in the day they used to run coaches down this track with wooden blocks for brakes. It’s is beyond me how that worked.

Topping out in Kalorama you’ll find magnificent views over the Dandenong Ranges, the Silvan Dam and along the Great Dividing Range. It’s a good place to get an ice cream or have a look in the adjacent gallery. After a taste of dirt we wanted more. We dropped down the other side of the hill. On the more protected side the trees get larger and taller. Arrow straight white boles shoot for the sky with long hanging strings of bark and dense canopies that let dappled sunlight splatter the track below. Eucalyptus Regnans or Mountain Ash is the tallest flowering tree in the world, regularly growing to over 300 feet. These are just one of the trees that get smashed by the now infamous Australian wildfires but in turn need fire to regenerate.

You can ride easy flowing dirt throughout the back roads of the Dandenongs, or ‘Dandys’ as we know them locally, for hours on end. The track we were aiming for was the Olinda Creek Road. It’s an easy, flowing and occasionally corrugated gem. Cruising along in high gear at idle, you can hear Kookaburra’s laugh and Bell Birds sing. The place melts me every time I return home. There are isolated, larger holes in the canopy that let more sun burst through. When conditions are just right it coaxes rare orchids to flower.

The ‘Dandys’ are not just about flora, fauna and dirt roads. You can pace a narrow gauge steam engine, affectionately known as ‘Puffing Billy’, as it makes its way between Belgrave [a delightful outer bush suburb] all the way up into the Dandenong Ranges proper where it ends in the tiny rural town of Gembrook. The train was historically used to bring logs to the city below. As the trees were stripped out, the cargo migrated to potatoes. My old man used to tell me stories of riding it to a Guest house in the hills for his school breaks, and having to wave the driver to disembark beside some old bush footpath. My abiding memory of Gembrook is of playing footy when the fog rolled in and not being able to see the other end of the ground. In true Aussie fashion the game went on and players only knowing a goal had been scored when the cars [parked around the ground] horns went off.

We arrived in Gembrook just as Puffing Billy was departing. We were there for coffee and cake but took the time out to watch the crew re-water the engine and couple up to the front of the train. There is a lot of frivolity as Fathers wave to loved ones and then set off madly in a rush to pace the train and wave to the kids as it trundles on down the line.

The roads out of Gembrook heading south along the rear of the Dandenongs meander in long sweeping curves, lined by trees and a backdrop of open cow country, and higher ground flanking the road. Travelling on the blacktop we were covering ground quickly. The photogenic Yellingbo Road House proved the perfect place for a cold drink and snack.

Mount Donna Buang is the closest ski resort to Melbourne and can get busy in the winter with day trippers. During the rest of the year it’s a lot quieter and on the day we arrived, we were the only people there. It meant we had the large rebuilt tower to ourselves. The views over the Ranges and the Great Divide are stunning and endless on a clear day. What wasn’t expected was the view of the 20 metre drop through the grating the tower is constructed from. It took a little getting used to. The bikes looked like toys from our vantage point.

Then I made a monumental mistake. I suggested to the Lizzie we could take another unmade road that would get us down the mountain a bit quicker and therefore get us to my Aunties in time for a nice little late afternoon tea. She’s a great cook, and there’d be scones. And jam. And cream.

I‘d forgotten it had rained through the night a couple of days back. Rain, a clay track and semi-road tyres aren’t the best of friends. The route down is lined tree ferns and steep gullies with treacherous drop offs. It’s easily rideable in the dry, but it wasn’t dry.

Half way down we reached that dreaded point of no return. Do we try to turn around and scramble the kilometer to the summit while we still can or slide down the hillside using hope and luck as our brakes? It was so slippery the lightest of touches on the front brake locked things up. Engine braking, gentle rear brakes and the occasional Fred Flinstone style braking were our only hopes. I did my best  to convince Liz (and myself) that rolling, steering and some gentle light braking was probably going to be less stressful than attempting to turn around. That clay was impossible to stand on, let alone ride back up the hill from a standing start. I reckon if a bike went down, we wouldn’t have got it up again.

Some persistence, tense moments and bit of stress later the clay turned to graveled dirt. It felt like the difference between Teflon and Rubber. Time started moving again after the complete stall of the last 9kms. I felt the top heaviness of that V-Strom all the way down and the next day my muscles let me know it. Liz hated that every meter of that descent and cursed me for days. It won’t go down as something I’d be quick to repeat. I spent a good deal of time trying to convince Liz we’d had an adventure in one of the most beautiful forests to be found and made it through safely. Wasn’t that what it was all about?

As she turned away I caught a glimpse of a slight smile as she said, ‘You’re still a bastard’!