“From the Mouth” is a regular feature provided by a collection of people and made up of opinion, true stories, drama, excitement and something of genuine interest. This months edition is provided by the hilarious, enigmatic Billy “Biketruck” Ward. Manager to TV travel star Charley Boorman, Billy is a man who has crossed many countries on many vehicles and always finds himself at the centre of something dramatic…

Loosing your panties…
Charley and I rode into Zambia from Namibia; it was quite late and dark. That’s rule number one broken, ‘no riding Africa in the dark’. After being at the Namibian border for 6 hours, I was now on first name terms with the moneychangers, I’d given all my biros away to kids so had to borrow one when I got to the passport window. I’d turned down a great deal with two prostitutes and negotiated a five dollar queue jump deal that came with a free bag of biltong. We both felt tired, but happy to be winding our way into the historic town of Livingstone, just on the border with Zimbabwe.

We’d been in touch with the hotel to give them heads up on our ETA. When they heard we were on the big Adventure Beemers they opened runway two up, allowing both fully laden GS’ers to touch down with no problems. We taxied across the grounds through the gates to reception to check-in but found that a rather large elephant blocked our path!

Beeping the horn seemed like a good idea at the time, however, perhaps a telegram would have been safer. He was a bull elephant. I knew this not because I’ve got David Attenborough as a Facebook friend but because of what appeared to be a fifth leg trailing the floor, a pair of six foot long tusks that I could retire on and a set of gonads that could keep Cameron Diaz and Ben Stiller in hair gel for the rest of their days. From his reaction I could see that he wasn’t a keen biker.

“Hi Billy, hi Charley – there’s three of them and they’re eating all of our plants knocking stuff down and scaring the clients. Can you help me chase them out of the grounds? I can give you free beer?”

Well, I’m always up for a challenge and free beer. I managed to persuade Charley that it would be fun so we put ourselves at his disposal, as they say. Turns out, the way to chase three bull elephants is with a soup ladle and a stew pot. Just banging the ladle against the pot and screaming very close to a bull elephant will do the trick, he tells us. They must really hate soup I thought.

“Whatever you do, you stand your ground. Do not run or he’ll chase you. If he charges – stand firm and make yourself tall and strong.”

The three of us edged slowly through the dark, towards the elephants. Each of us armed to the hilt with soup ladles and pans borrowed from the hotel kitchen armoury. A thought flashed through my mind about life after death and whether anyone would actually miss me. Indeed if I’d been wearing a kamikaze headband, it would have been an appropriate way to dress for the evening. The BMW rally suits and enduro boots were probably not!

Admittedly and to my surprise, the big pachyderms turned slowly away from us, unhappy but resigned to their position and yard by lumbering yard they moved towards the exit gates. My fear subsided and my confidence grew. I turned and noticed the growing crowd of hotel guests and staff positioned safely behind the 4×4’s parked nearby. They looked on, impressed, I thought, iPhones in video mode. I nodded to Charley and we smiled broadly for the cameras. God we’re feckin’ brilliant, aren’t we.

Then the elephants stopped. The leader (he wore a badge) turned and trumpeted. His trunk (I think it was his trunk) was vertical and his ears flapped wildly like… well like wildly flapping elephant ears. The noise was scary, very loud and left your head buzzing as the air resonated around your ears.

“Don’t let him intimidate you…” had been the advice of the hotel manager at our earlier briefing as we were getting tooled up with the ladles and soup pots. So, I shouted back at the big bully and…

…He charged. The charge came with screams, both from the elephant and from Charley and me. I banged harder – Charley banged harder. I screamed louder – Charley screamed louder. I stood taller – Charley found it hard to stand taller, but hey ho. I glanced to my right for further support and encouragement from our hotel manager-cum-elephant expert – he was gone! My head swivelled round nearly 360 degrees to see him disappear through the hotel kitchen and then for some reason the elephant ran passed me looking determined and focussed – on Charley.

Within four strides an elephant can be at 30kph and it was clear that a ‘Charley’, wearing enduro boots would need a lot more strides to beat that. The direction they went in was ‘the bush’. Now, generally, I think bush is a good thing. But if you’re running through it at 15kph, with an elephant, which wants to pull your limbs off – and he’s running at 30kph, then it’s a bad thing.

The screaming was so loud, it was hurting my ears, and so I stopped. I wondered what I was going to say to the press and to Charley’s loved ones “…he went they way he would have wanted…” No, that wasn’t going to work. 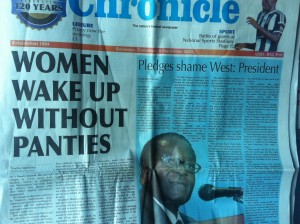 Panties and Elephants – Just an average day in Zimbabwe

Charley was missing for nearly an hour. He had to walk back along the banks of the Zambezi, hiding from his newfound love. He was scratched, bedraggled and pretty pissed off. I tore up the obituary that I’d started to pen. I wasn’t happy with it anyway.

In the morning, the front-page headline in the national Zimbabwe Chronicle read…

“Women loose their panties…” it was a national crisis that we could do nothing to allay. But our more personal crisis with Charley was resolved with a pack of five, from the local market.