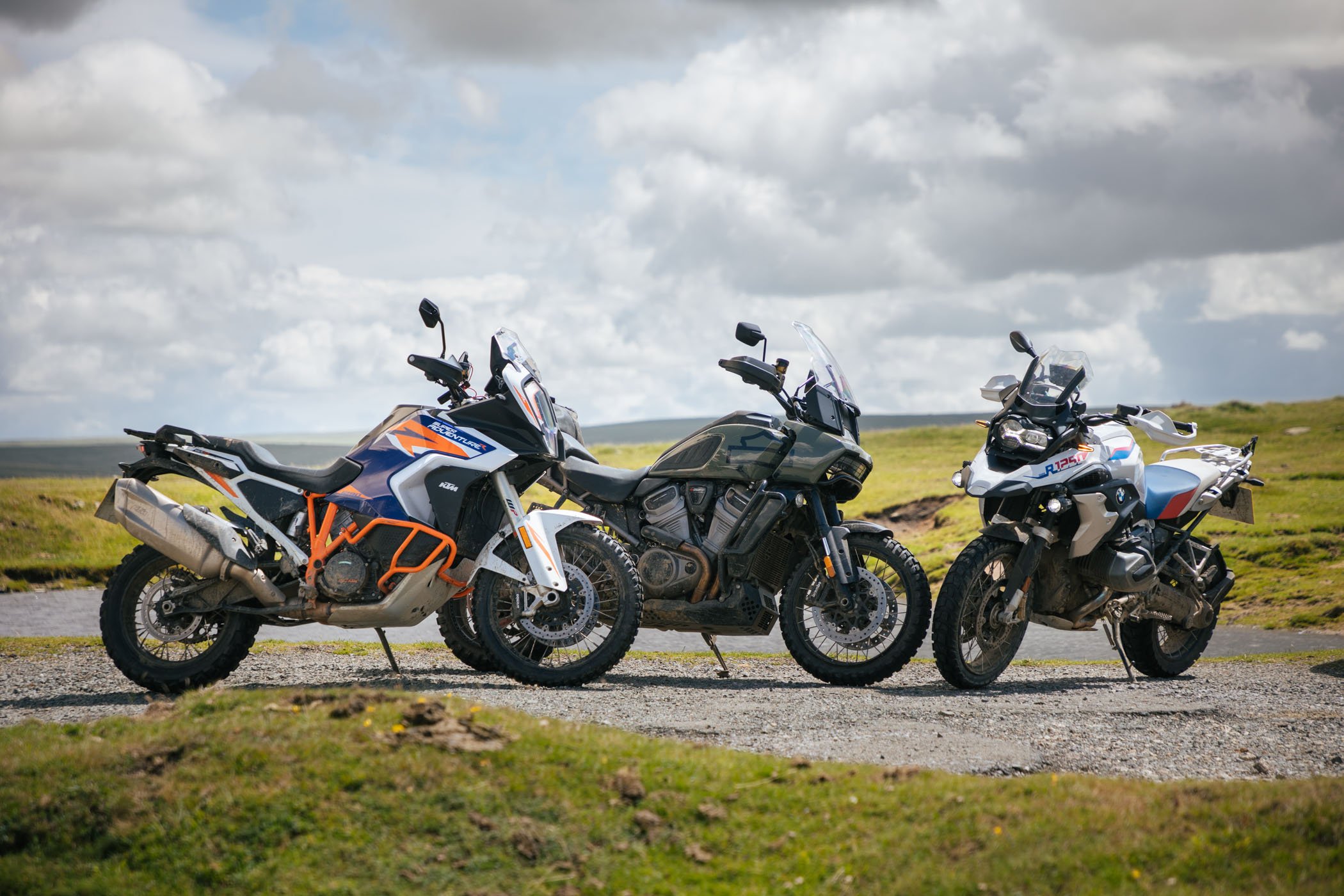 The Harley Pan Am is a bike that has genuinely excited me. It’s something different, refreshing, wild looking and comes from a big brand. Anytime we get a big bike from a big brand it’s fun. The KTM 1290 also excited me for a different reason. Progress. This test is all about pitching the challengers against the king.

It is no secret that Harley have a fight on their hands. Things haven’t been great for years now and for a while it seemed as they were scrabbling at the cliff edge. Crazy ideas were popping up that had no shred of relation to their brand. They’re fixing that, steadily rebranding, refocussing and the Pan Am engine platform is part of that modernisation. They are in very different place to a lot their competitors and have a lot of R&D to squeeze into a small space. To some respect, you’d say they’re the opposite of KTM in their growth cycle.

This was a fascinating, enjoyable and bloody wet test. The route was a picked apart variation of the Great Western Trail section of the TET here in the UK. At the time it was new to me and it is not exactly big bike friendly. Doable? Of course, but the south of England is soil and chalk. When it rains there is no base to the ground, meaning a lot of slippery going and wet ruts. Almost the opposite of most places ADV bikes are popular and for that we can only apologise. It is however great fun and in between the ruts and mud are some truly joyous, easier dirt roads. As you can see from the video, we got stuck, got unstuck and loved every second of it.

It’s a really nice bike that is not suited to the wet.

So what about the conclusions of this test. After now having ridden the Harley Davidson Pan Am in North Wales in the Wet and South England in the wet, I can conclude some things. It’s a really nice bike that is not suited to the wet. It is a Utah, California, Southern Spain kind of bike. It is a Harley. It is sensitive to tyres massively, to bike set-up and is littered with compromises. It is also a very nice bike to cruise on, enjoyable on flowing roads and would be lovely to ride a long way on. Harley have also got a great motor.

The KTM is the best ‘big’ KTM I’ve ridden after the 790/890 models, ever. It is a true big ADV; capable of tons and super fun to be on. It solves a lot of the older problems this bike has and really gets me very excited for what the future holds. KTM are making great bikes everywhere. The BMW is the BMW. It has been nearly the same bike for 8 years. There is some variation and I enjoy riding it a lot but the gap is non-existent now and BMW have some work to do. For a while their lead with this bike was huge and everything else always felt like there was something missing. Now that is not the case. Choosing the KTM is not a compromise and that should have the Germans worried.

I’ll happily answer any questions you have about the performance of this bike, either down below or out in the wilds of the Youtube comments section. Come say hi!