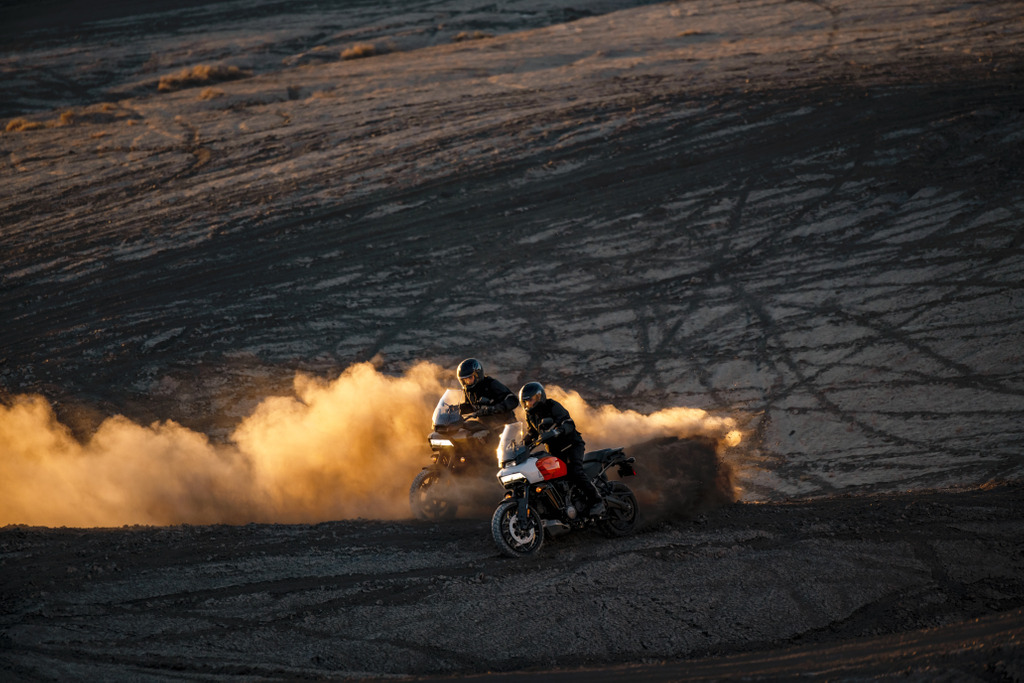 Harley Davidson have finally announced put details to public on their new ADV Touring bike. It’s interesting, it’s different and their press video had a production value that was through the roof.

This one has been a long time coming. Much like Yamaha and the Tenere 700, Harley started letting us know an adventure bike was coming around the same time they started releasing slightly off-brand electric scooter concepts. They had the bike, or some version of it, at the UK’s major bike show two winters ago and now it’s here, with specs, price and most highly produced marketing video we’ve seen in a bajillion years.

Jason Mamoa, a huge ton of coal and a lot of footage with really old Harley’s make for something dramatic, impressive and vastly different to the video KTM just released announcing their all-new 1290 Super Adventure. One thing is sure, Harley mean business. While they’re marketing play leans heavily on trying to not piss off hardcore fans by drawing lineage to their heritage from WWI, WWII and riding off-road because there were no roads, really this represents something much bigger. It represents the beginning of a new era and brand reinvention. I’m no Harley expert but their new engine, on paper at least, is a huge departure from their brand staples of the last fourty years. It’s still a V-Twin but it stops there. You won’t find push-rods, cooling fins or astronomical torque figures. Instead, the full press release around the 150 HP D Revolution Max engine reads like something that came from Ducati or KTM. It’s got a DOHC head, Hydraulic lash adjusters and Variable Valve timing (whatever that all means).

It’s also heavy but not outrageously so (245kg’s wet), has 190mm of Showa provided, semi active travel with adaptive ride height (gets lower when you stop), Brembo Brakes, rider modes, cornering ABS and basically everything that a £14k ADV/Touring bike needs to have to be actually on someones buy list. Whether it’s good or not is whole different question. It’ll be interesting to see how this bike turns out, how it fairs against the competition and what Harley Really see as the core customer for it. Is it against the GS and Africa Twin? Is it a half way house to bring Harley riders to a new market or drag adventure touring fans to to Harley? Or Jason Momoa there to bring Aquaman lovers to motorcycling? What do you think of it? Let me know int hat comment section 👇🏽

Below you’ll find the specs of the bike in detail and if you’re more interested in detailed discussion of the bike we’ll be talking about it on Patreon for the weekly podcast this Thursday.

Built to Endure, Designed to Explore, and Engineered for Adventure

The Pan America™ motorcycle is Harley-Davidson’s explore-it-all machine for riders who see touring as detouring – on road and off. This rugged, powerful, technologically advanced multi-purpose vehicle is designed from the ground up to inspire rider confidence and fuel the spirit of adventure, wherever the road may take you. Harley-Davidson has leveraged its cutting-edge design and engineering capabilities to create the Pan America™ 1250 and Pan America™ 1250 Special – all-new, adventure-touring motorcycles, each designed with premium features, outstanding performance and innovative technology.

“From its inception more than a century ago, when many roads were little more than dirt trails, Harley-Davidson has stood for adventure. So, I’m very proud to present Pan America as the first adventure touring bike designed and built in America,” said Jochen Zeitz, chairman, president and CEO Harley-Davidson.

“The Pan America models exude that go-anywhere spirit, shared today by riders around the globe who want to experience the world on a motorcycle.”

Pan America models are equipped with technologies designed to enhance the riding experience, including multiple electronically controlled ride modes plus Cornering Rider Safety Enhancements. This broad collection of technologies is designed to match motorcycle performance to available traction during acceleration, deceleration, and braking. The Pan America 1250 Special model is equipped with electronically adjustable semi-active front and rear suspension and, as an industry-first innovation, can be equipped with optional Adaptive Ride Height (ARH). The revolutionary new suspension system automatically transitions between a low stopped position and optimal ride height when the motorcycle is in motion.

Harley-Davidson design and engineering teams collaborated throughout the process of creating and refining the Pan America 1250 and Pan America 1250 Special motorcycles with a vision guided by utility. Like a good multi-tool, function leads the form of these Harley-Davidson® models. From grab handles to integrated luggage mounts, to a horizontal headlamp configured to better illuminate an off-road trail, function defines style. Inspired by the spirit of rugged North American off-road versatility, the Pan America 1250 and Pan America 1250 Special models stand out visually in the adventure touring landscape, with design that reflects the capability of the motorcycles.