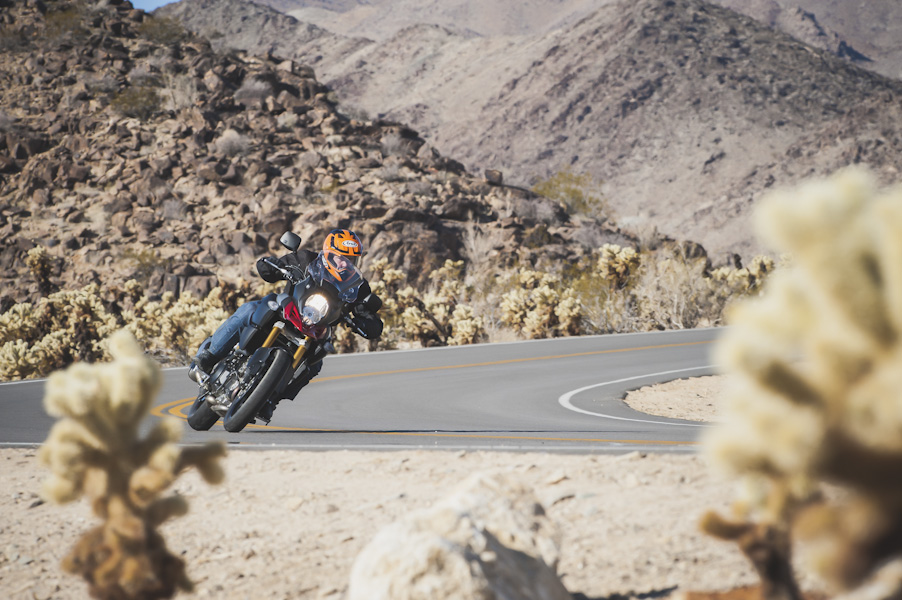 Admin
Bike ReviewsSingle BikeVisual Media
February 8, 2015
Page OnePage TwoImage Gallery
The V-Strom 1000 is a bike Suzuki needed to update. Continuously outsold by its little brother, the V-Strom 650, the bike eventually ceased production in 2009. The Japanese brand have gone back to the drawing board, done their research and returned with a completely re-designed, re-engineered bike they hope will bring home a slice of the adventure bike pie. Suzuki America invited Brake Magazine to join them as they unveiled the new machine to the North American press in the glowing sunshine of Southern California Starting completely from scratch, the new V-Strom 1000 ABS has ditched nearly all the hardware from the old bike. This means a stiffer and lighter chassis, a slightly bigger Twin-spark engine and more upright ergonomics, resulting in a bike that is substantially lighter and a bit more powerful.

” For the very first time, Suzuki has introduced a traction control system”

Its torque curve is also claimed to be totally changed as well. The only major parts remaining from the previous incarnation are in the gearbox. On top of the lighter, stiffer design, Suzuki updated the 2014 V-Strom 1000’s adventure-bike styling, giving it a front beak and a more upright riding style as well as some ‘technology’ to help it compete on the spec sheets with its European rivals. For the very first time, Suzuki has introduced a traction control system to one of its models and it has also added ABS to the standard package.

The new styling was based around the DR Big, Suzuki’s awful looking adventure bike from the late ‘80s. In reality all it shares in design with the Big is a front beak. It’s very run of the mill, it’s got the beak, an LED taillight and some of the obligatory brushed aluminum paneling, but otherwise it’s unremarkable. The V-Strom intro was scheduled to take the journalistic pack from Anaheim, California on a 450-mile round-trip, covering all the terrain a potential owner would be likely to venture into: freeways, towns, mountain roads and a little dirt. With decent mileage to test the bike over, we were able to get a good feel for the potential of the new model.

“It’s a fat, meaty feeling from the engine, which is tremendously smooth”

Hopping on board, the first thing you notice is how easy it is to get your feet to the ground. Suzuki has re-shaped the seat, so the two-footed dangle in the parking lot can be done more authoritatively. It was surprising how much extra leg length it affords you, and coupled with the modest seat height, makes it a friendly bike to control around town. Suzuki’s research saw that customers wanted a torquier feel to the V-Strom engine for a harder pull from the bottom and less on top. Well, they nailed it. The V-Strom makes all its torque between 3500 and 6000 rpm, giving riders just what they asked for. It’s a fat, meaty feeling from the engine, which is tremendously smooth and pulls well. As soon as you pop over that magic 6000 rpm, the torque quickly flattens off and the fun is done, so it’s time to change gears. It still has power from mid to top and is more than capable of moving quickly, but it doesn’t feel like that’s where the engine wants to be. Changing gears is key to getting the most out of the V-Twin, and the buttery smooth power delivery makes for enjoyable riding. That torquey delivery also make it more than capable during our off-road sampling; it was easy to shift gears, limits wheelspin and moves forward with confidence.

Suzuki decided to change the sixth gear ratio to improve the comfort on freeways, and nailed it. The V-Strom is stable, doesn’t have a lot of vibration and still has enough roll-on power in reserve to overtake traffic. In the twisty roads, the V-Strom is surprisingly good. It’s very consistent in everything it does. The 1000 tips in without any substantial effort and is easy to change direction on. The most pleasing characteristic, however, is how nicely it holds its line in the corner, so stable and planted that it fills riders with confidence and lets you ride quickly without much mental or physical input. Combined with the strong torque curve to pull you out of corners, the V-Strom becomes a surprisingly enjoyable bike to ride. Unlike a lot of the adventure bike rivals in the V-Strom price bracket, the suspension feels very solid. Suzuki opted to go with a fully adjustable fork and preload adjustable rear shock, eschewing the electronic systems of the bigger adventure bikes but still offering more than the rest. In the corners, the V-Storm doesn’t twitch and, more importantly, doesn’t wallow. The motorcycle held to the road well at all times and the only adjustment we did was to add a turn more preload to the rear shock. More surprising is the balance that Suzuki has achieved with the suspension. Despite being responsive and stable on twisty roads, it’s very comfortable too and doesn’t bounce or skip around on the less than perfect SoCal freeways.

The new Suzuki Clutch Assist System (a slipper clutch) performs as it should. More than a few times it really made a difference to the V-Strom’s ease of riding. On aggressive multi-gear downshifts, such as corner entry, it removes harsh engine braking stutter at the back wheel, helping the bike hold line, which in turn assists with the confidence and comfort of the bike. The radial-mounted Tokico brakes on the V-Strom, much like the rest of the bike, are solid.

“The biggest surprise of the V-Strom is the electronics package.”

They aren’t incredible, but the 310mm twin disc setup is more than capable of hauling you down and does so with surprisingly good feel. The overall power could be better but for an ABS system the feeling at the lever is on the better end of the spectrum. The biggest surprise of the V-Strom is the electronics package. The ABS and traction control are relatively basic systems and are setup in a conservative manner. After all, it’s an adventure bike and they are intended to be a safety net, not a performance enhancer. But much like the suspension, the Japanese marque has hit its mark well. The ABS is on the safe side, but on a normal ride you won’t reach its limit. The same can be said for the traction control. There are two modes of TC; Mode 2 is the more gentle traction option and will kick in pulling away from the lights quickly. Mode 1 is closer to normal, with the most impressive part being how smoothly the system cuts power. Unlike many TC systems, especially more basic designs, there is absolutely zero harshness when the power is cut. It’s completely safe. Run out of grip and Suzuki’s secondary throttle valve cuts in to manage the ignition timing and air delivery. The end result is a feeling that is akin to rolling off the gas smoothly instead of chopping the throttle. It is well setup and I rode most of the two days in Mode 1 without issue. Off road, the little V-Strom is also surprisingly relaxed. That mustn’t be confused for saying its F800GS capable, because it’s not. The low sump and the inability to switch the ABS off (you could remove the fuse) are the limiting factors. It isn’t bad by any stretch. The standing position is good, power delivery smooth and the bike will be more than comfortable on dirt roads. It could stretch a little more, it just needs the optional sump guard.

“For the price bracket, it represents great value.”

The 2014 V-Strom 1000 ABS is a very strong effort and Suzuki have done a good job of producing a bike that is solid, dependable, capable and extremely comfortable. After two days of decent saddle time, the bike proved more than proficient at keeping riders happy. The riding position is comfortable, the bar bend is good and it all comes together to make a bike that will easily chew up the miles. On top of this, the menu navigation is user-friendly and doesn’t need a degree in computer science to operate, the dash is easy to read and the quick adjust screen is a nice feature. For taller riders like myself it wasn’t too effective, even in the higher position, however Suzuki produces a tall screen. There are a few negatives to the 2014 V-Strom 1000 ABS. Some of the plastic work is a bit cheap and the area around the dash felt like ‘kids toy packaging.’ I also can’t understand why you can’t turn off the ABS, and the exhaust looks very exposed. The only other issue I have is the excitement factor, or lack thereof. The V-Strom is a very good bike to ride, it’s efficient, is well setup and doesn’t do anything wrong, but at no point was I thrilled riding it. I enjoyed riding it. You can carry good corner speed and ride quickly, it’s very safe and calculated, but as such lacks kick. For many people those characteristics will be a selling point. For the price bracket, it represents great value. Falling just above the F800GS and Tiger 800XC price at £9999 ($12,699) it’s a lot of bike for your green. The adjustable suspension is a good alternative to electronic adjustable, the engine is strong and as a whole it’s a very complete bike. There are also several different packages on offer, with various add-on and different livery to suit your requirements.
If you want to learn more about the new Suzuki V-Strom ABS, including interviews with the designers and tech specs click here.

You use use keyboard arrows to navigate.