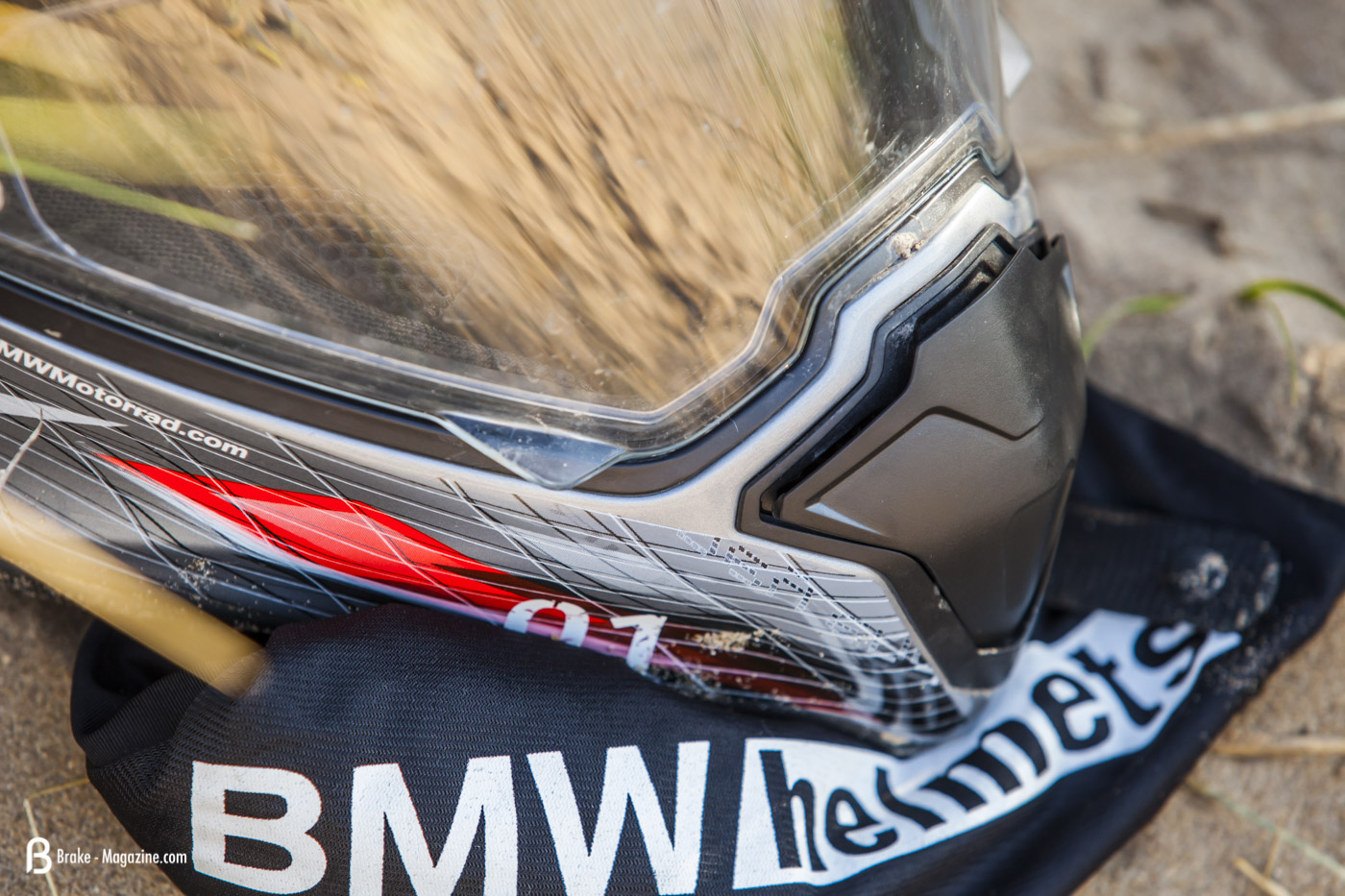 The mouth piece works well and is removable

Jonathan Pearson
Kit ReviewsRiding EquipmentVisual Media
July 30, 2015
Page OnePage Two
Helmets are a personal thing. What works for one head doesn’t work for another, which is firstly why we’re so fussy about them and why it is such a difficult job to make one to suit everybody. Imagine how many different sized heads there on the people who buy a GS. Good luck BMW I say.

Despite this pessimistic beginning to a review I’m going to say you’ll be pleasantly surprised by BMW’s new and improved dual-purpose GS helmet. I guess in this marketing-savvy world we live in this is just another accessory to buy if you’re a BMW kinda rider – you don’t have to own a GS to wear one of course, but it helps.

I’m simplifying that BMW ‘top brass’ story of course, it is based on what someone said to someone else who said something to me, but you get the gist of it and the truth is I wore the old BMW adventure helmet loads and it wasn’t good enough. It was a bit of poor relation with creaky build-quality, easily breakable parts, a visor which didn’t fit and leaked water when it rained and generally feeling a bit cheap.

The new GS helmet rights those wrongs, not least with good build-quality and function and ticks the boxes every decent, modern helmet should: a removable/washable comfort liner, impact-absorbing EPS inner shell, adjustable ventilation system around the whole helmet and a carbon fibre reinforced outer. It also connects with the BMW neck-brace and communications systems, has detachable visor system, accepts off-road goggles and has been designed partly in a wind tunnel. All good on paper then.

Does it work in reality? Yes. I’ve tested the GS helmet in quite a range of temperatures and weather conditions, in truth I’ve been wearing it alongside my regular helmet through most of 2015 leading groups on adventure tours and also instructing at the Off Road Skills course in Wales, UK. Wales is pretty good at throwing every type of weather at a human and in that test alone the GS helmet has come up trumps, leaving me with few complaints.

“The old model’s visor was rubbish frankly, letting water in and never sealing properly. Not so with the new GS.”

It keeps the rain out with a visor that seals for a start and on the flip-side lets plenty of air in on hot days through the chin bar mouthpiece (with its detachable cover) as well as the very effective venting system. A bonus is feeling you can breath freely with the chin-bar vent opened and the ‘chin flap’ that affects up-draft removed as well.

Speaking of affecting up-drafts, like all off-road oriented helmets it’s a bit drafty around the face in the colder weather, though the chin flap reduces this quite a bit and there’s an extra shroud, which I don’t have but closes things in further making it warmer. Without the extra packing ‘garter’ (for want of a better word) if you’re used to the way a road helmet encloses around your chin and face this will feel a tad ‘naked’. But it is the norm for more off-roady helmets and that sits fine with me.

As mentioned, the visor works and as such is a huge improvement over the old GS helmet. The old model’s visor was rubbish frankly, letting water in and never sealing properly. Not so with the new GS, which sits snug on its rubber seal and with the anti-mist insert as standard (and anti-scratch external coating) vision is good and clear in all but the very worst of weather. It can be relatively easily removed to use conventional goggles if you prefer (though I think you’ll need to be careful with the peak/visor screws which are frustrating to re-install due to the tension the peak is under.). You can get a tinted version too.

The visor shifts more or less out of my eye-line when I want to ride with it up out the way, as I often do off-road. It’s a personal thing I think but I’d prefer the visor to go higher up (though it can’t because of the peak) chiefly because the ‘W’ shape along the visor’s bottom edge sits at the top of my eye-line. It’s not major problem but it’s always there, just, when I ride visor up.

The anti-mist insert, like most Pinlock systems, isn’t so clever in the dark however. It affects your vision towards oncoming traffic and creates a sort of double-vision effect when you’re faced with lights. I’m not too fussed about needing to carry spare visors so ideally the best solution with this helmet for me is a visor without the insert and application of my own anti-mist spray so I could keep things crystal clear at night.

“Don’t be confused and think the GS is along the same lines as the more road-based adventure helmets like Arai’s Tour-X and Shoei’s Hornet.”

The carbon fibre reinforced (or better still fully carbon fibre) outer is real must-have in my book not just because the shell is very strong but because it also means the helmet is light, BMW claims 1450g. Like many, I’m prone to wearing a helmet for long periods in one day and for many days in a row and while your neck muscles can get accustomed, it helps to have a lighter lid like this on in the first place.

It’s also stood up well so far for the hundreds of times I take my helmet on and off while I’m teaching people – hours of instruction means it’s constantly on and off and there’s no wear to the strap, connector or side pads where they rub so far. I find the GS comfortable to wear for long periods with no pressure points or undue sponginess.

Though comfortable on my head it does allow a little too much movement when I ride above 50mph (approx.). Basically the peak gets a bit peaky and prone to catching the wind at speed – more so as the helmet bedded-in. You’d suggest this was because the helmet doesn’t fit well enough but I don’t think this is the case – it fits well. It’s liable to start rotating the helmet backwards above those speeds and this despite the peak being very well vented. Riding into a strong head wind, I can let it do this to such an extent the chin bar comes right across my face. The helmet’s never in danger of coming off (because it fits well) and certainly Brake’s editor Llewelyn does not have this problem – proving that these things are personal to your head shape and size. Any off-road lid will do this to a degree if you let it so I wouldn’t necessarily mark the GS lid down for it. But, well, I wish it didn’t do it so much.

BMW recommends you take the peak off if you’re travelling at any speed but I’m not into that, mainly because wearing an off-road lid without a peak makes you look like a dick.

This helmet is pretty quiet for (what BMW calls) an ‘Enduro’ helmet. Quieter than many dedicated off-road helmets I’ve worn but not obviously quieter than the more road-based ‘dual-purpose’ helmets from the likes of Shoei, Arai or Shark.

The GS’s design looks good too but I’m inclined to ask, “don’t you think?” because these things are subjective too. It comes in white, matt black, ‘Comp’, ‘Xplore’ and ‘One World’ designs and regardless of your colour preference I think its neither boring, plane, too round or too angular and aggressive like so many off-road lids can be. Just about exciting enough you might say but still with a hint of German about it – which isn’t said as a racist remark more a comment of classic German design characteristics.

Don’t be confused and think the GS is along the same lines as the more road-based adventure helmets like Arai’s Tour-X and Shoei’s Hornet, despite them being in similar price range. They’re a different breed and as such less off-road than this GS model which is better suited to the task and copes better with a hot head. It deals well with road work and although it comes with a couple of minor foibles I’d expect them of any off-road lid. Generally it’s comfortable and performs well in a wide-range of riding conditions, which is tough ask. If I were to compare the GS helmet to a GS motorcycle I wouldn’t put it up there with the R1200GSA, it’s more comparable to the F800GS.