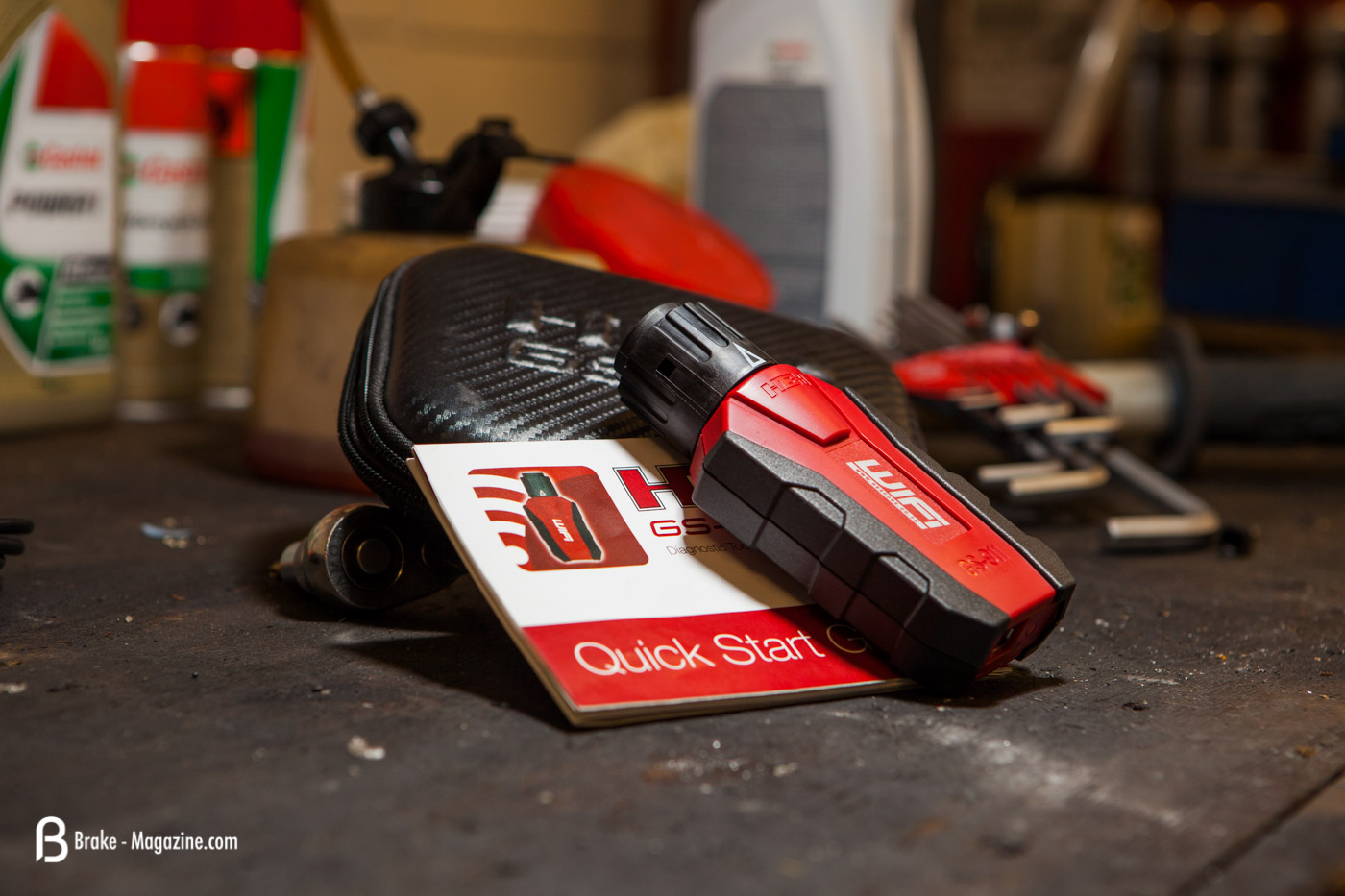 The diagnostics unit is incredibly small.

To view images larger click the magnifying glass in the middle of the image above.

Page OnePage Two
In the ever-changing world of motorcycles, the electronics has advanced the most dramatically. The last 20 years has seen bikes move forward incredibly and the adventure segment is without doubt at the forefront of that. The list of electronics is ever expanding and whilst bikes are on a whole more reliable than they have ever been, this direction when combined with warranty requirements has created an environment where many people find it both daunting and challenging to engage mechanically with their motorcycle.

Whilst the principles of electrical systems aren’t difficult, the accessing and fixing of them is not so and has become the sole task of your local dealer. That alone puts a vast many people off using perceived ‘more complex’ bikes for travel. The dealer service cost and inaccessibility causes many to bemoan the bikes as unfixable. Step up to the plate Hex Code, a South African company who, some eight years ago began a project to produce a system that allows normal folk, without access to BMW’s diagnostics, to work on the electronic side of their bikes.

That project has come to a head in the current generation GS-911 Wi-Fi edition, a fully mobile self-contained diagnostic unit that lets the end user do everything from check and clear fault codes, to a full service interval reset and re-programming of all their bikes main electronic components, idle control valves, throttle position sensors and all the rest.

There are two main sides to testing a product like this, the perspective of the mechanically average, home, travel savvy person and the workshop heroes, who understand the ins, outs and middles of everything on a modern bike. To address that we called in professionally trained, BMW Off Road Skills resident technician Evan Davies. A man of many skills (two trips to Dakar as a mechanic and technician status for three different corporate brands) we asked Evan to put the GS-911 through its paces.

The first thing you notice about the GS-911 is the size. It’s small, compact, well-shaped and incredibly light. So light, in all honesty it feels too light. Now the lightness is definitely a positive thing, it’s going to take up no weight in your bag, it’ll squeeze into the smallest pocket but for some reason we all associate heavy with quality. That aside, there is very little to fault with it.

The methods of connection are designed to work with any device. The easiest and our favourite way is to use the device is via the built-in Wi-Fi and app, which Hex have developed for both Apple and Android. From there it’s a matter of plugging the device into the bike via the ten pin connector found under the seat, pressing the small button on the base of the device and connecting to the GS-911 Wi-Fi signal. It’s genuinely that easy and works every time.

Alternatively you can set the device up via USB to connect to your router and then connect to a computer through the main Internet. It’s helpful if you’ve an older computer without Wi-Fi. Lastly, you can plumb everything in the via the USB B to USB A cable provided and have a direct hard line to the bike. All three systems performed faultless.

Once connected there are different apps to choose from, the ‘emergency’ app and the ‘service’ app. The former is essentially for mobile devices and provides the ability to see all of your bike’s live vital outputs. It’ll also display fault codes from the main control modules on your model of BMW bike, allowing you to identify the problem and clear the code.

The service app is essentially for the more complex elements of maintenance. For the operations you’d typically spend a little more time on, from resetting the service intervals to total recalibration of all the main electronic components, essentially allowing you to do pretty much everything your BMW garage can do, from the comfort of your own home or the desert/jungle/mountain garage you find yourself in. The crux of this is the service application is windows only.

As a mechanic, I fall into the category of competent but far from ground breaking. I can solve most physical mechanical issues, change tyres and generally get by. I know what voltage and current do, I can put an electrical tester on something and watch it glow and am able solve the simple problems you might be presented with using two-part metal and zip ties. I am not a technician. You’ll never find me delving into the finer points of an electrical system with any finesse. If it’s plug in and plug out I’ve got skills. If it requires intelligence I might as well be a chicken.

So the GS-911, does it work for a person like me? Absolutely yes. First up, the iPhone app is incredibly easy to use. You could give this to a person who struggles operating a can opener and they’d figure it out. It couldn’t be much more simple. It’s stable, doesn’t crash and works. It even looks good. The fault code finder is perfect for someone like me. It’d allow me to see the problem, see if I can find the part and solve any obvious mechanical issues. If a wire is broken, you can fix it and clear the code.

Even more important, it allows you to effectively communicate with someone who may be able to help and relay the exact problem. Say your bike has stopped working but with the lack of mechanical knowledge you have no idea why. The GS-911 allows you to plug in and find the problem. Now, no matter where you are in the world, having that knowledge can be a godsend. Maybe you need to phone a BMW mechanic and tell him the issue. Combined with the service app, said mechanic can talk you through solving the problem and you’ve got the tools in your arsenal to solve it. Maybe you find a local mechanic who doesn’t have the ability to plug into the bike, but does have skills to fit an essential part, or whatever. You get the picture. It’s ease of use and the powerful features are an enabler, regardless of your knowledge base.

The same applies to the service app. I doubt I’d make much more use of it than resetting the service intervals post oil change. This may be especially useful if you’ve got an older GS, post warranty and no longer desire to pump the local dealer full of your hard earned. Other than that, my knowledge isn’t there, until I need to do something with the help of another person’s knowledge.

Are you a mechanic?

“My favourite feature of the GS-911? It’s like a tin of baked beans. It does exactly what is says it will and I’d want it to. The app’s incredibly easy to use and lets you see all the little bits you may need to on the trail. You’ve got live information and fault code management right there in the palm of your hand. It’s so easy too, just a few taps of the screen can have you on the move again.

I was a little disappointed you don’t have all the special functions through the app. Maybe it’s coming, but to reset service intervals or recalibrate anything you need the PC app. It’s not the end of the world but it’d be so cool to be able to do it from the phone or the iPad.

It’s a total, plug and play device. You’ve got to do an initial set-up but it’s so simple. It’s a four-step process from a quick start and was no stress. I use a lot of other tools that can be damn hard work and cause a lot of stress but this system doesn’t, I’d quite happily use this all day long.

From the perspective of a professional mechanic, current or former, you can do everything you’d need to do electronically on a BMW model. It’s utterly brilliant. It gets you into the ECU and let’s you do everything. The main limitation of the system compared to say, the BMW service system, is lack of information depth to help with the problem solving. For example the BMW system gives information as to where the part you’re working on is located, what may cause the problems and so on. I admit that’s a real nitpick because the Hex Code unit is a different beast and costs a fraction of the price, it doesn’t require a desktop computer and works from my iPhone. Plus it’ll still do everything that the official tools will.

The whole system is so simple, you could give it to someone who doesn’t know what a spanner is and they’d be able to work and find the fault, they’ll just not know what to do with the information. Knowing Lambda sensor two has a zero voltage is all well and good if you have the knowledge to find it, test it and replace it. The website has a few good bits of info which is nice and I’m definitely looking very deep to find any problems with the device, especially as it costs around £340/$399US.”

Something that sounds too good to be true must be right? Honestly, as great as the GS-911 sounds on paper, the end result is better. Like us, you need to drop any scepticism you have right now. The GS-911 is without doubt a next level tool, regardless of your knowledge base. It’s so small, so easy to use and so powerful it’s really hard to argue against it. It’s an enabler and I think easily as important as anything else in your tool kit. You wouldn’t leave on a big trip without a way to fix a puncture or some two-part metal, so why the heck would you leave without a tool that will let you, through your own knowledge or the help of someone with a better skill set, solve and identify all the electrical problems. You can even email all the data straight from the app.

It’s not cheap, but on a power-to-cost ratio, this is the Ferrari of tools. It’s shame it’s only developed for BMWs at present but we hope that’s just a matter of time. The biggest downside for me is the lack of OS X support and limitation of the mobile app. I’m sure this too is a matter of development time, but to be able to add all the features of the Windows app to the mobile edition would be incredible.

All-in the GS-911 product couldn’t be easier to use, it’s quite clearly been a process of evolution that has arrived at this top quality, well thought out, brilliantly designed product that gives the end user an incredible amount of power over their own bike. No longer are we under the restriction of the BMW’s dealers, the world of electronics is in the palm of your hand.