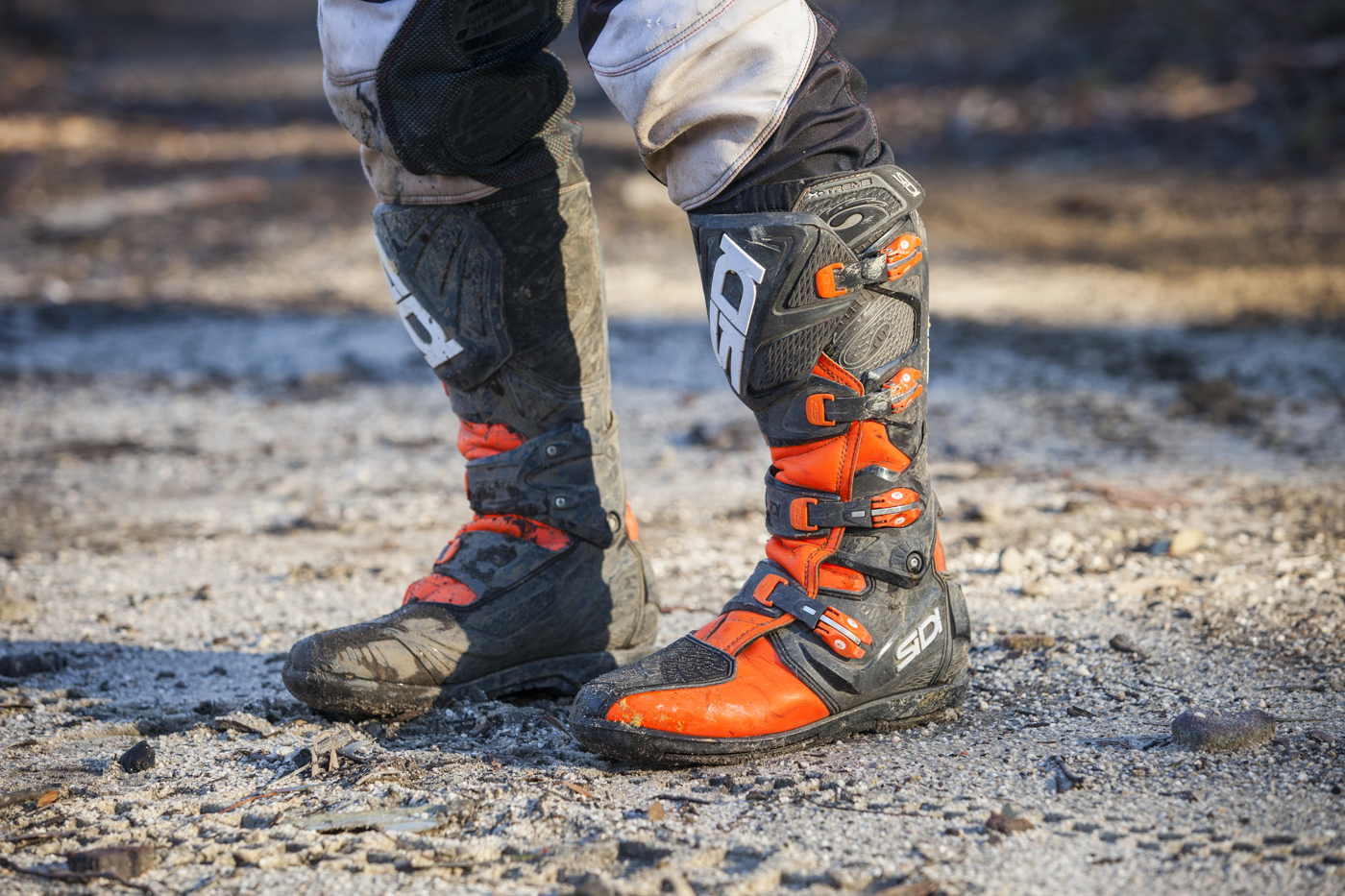 Simon Pavey
Tester
10 Dakar Rallies, tens of thousands of kilometres adventure riding all across the globe and a world famous training school. Si Pavey doesn't need much more said about him. A fantastic rider, with a brilliant understanding of the requirements for learning riders.

The Sidi X-treme (X-3 in the USA) is a mid to high end motocross boot. It sits one step down from the legendary Crossfire 2, offering a lighter slightly less protective alternative. It’s also a little lower down the price scale. We gave a pair to Si Pavey as he embarked on a epic trip across the Australia outback. Nearly 6000km’s later he filed the report.

On the surface, the X-treme isn’t a hugely special boot. It sits in a crowded market place, just below the top end products of all the major boot manufacturers. It’s still a premium product and has some stiff competition. The likes of Alpinestars’ Tech 7 and Gaerne’s G-React occupy a similar price point and offer similar levels of protection. That initial impression couldn’t be more wrong. After 6000km in the saddle, I’ve had a fair amount of time to judge the X-treme. It’s one of the best boots I’ve ever put my feet into and easily the best for off-road heavy adventure travel. That’s a bold statement but the logic is sound.
The Fit

Box fresh, the Sidi X-treme is a boot that fits me unbelievably well. Fit is always personal and fit doesn’t make a great boot. A trainer can fit tremendously but hooking 100 km\h across the desert in them isn’t the best idea. They’re feel very neutral to wear, not narrow or wide but true to size. More importantly, my pair fitted without lumps, bumps or any of the discomfort you sometimes get with a new boot.

“There isn’t any excess space; the fit isn’t sloppy or clumsy”

Internally there isn’t much to note with the fit. It doesn’t do anything particularly weird and didn’t need breaking in. The first day of riding wasn’t awkward or overly stiff, it all felt very neutral. A lot of Sidi’s, especially the SRS versions, are described as narrow but the X-treme hasn’t struck me that way.

Unlike a lot of the competition, there isn’t excess space, the fit isn’t sloppy or clumsy but I can still get a thicker or a waterproof sock inside without feeling like my toes are going to drop of. One of the best aspects of the Sidi X-treme is that lack of slop. By making the boot this way, they’ve kept it small, slight and narrow. It’s really unique for an MX boot, which often catch newcomers feeling like they’ve strapped moon boots on. For mixed riding, road and off-road, it’s a huge asset, that makes life in the boot awesome.

Compared with a lot of premium MX boots it’s soft. It has more flex in the body of the boot and the sole but when looking at the areas you need a ADV boot to excel in, it strikes a brilliant balance. It means fit and comfort wise it’s better for walking and exploring in. The slimmer profile feels less clumsy on the ground too, so being in public in them doesn’t make you feel like a drunk Michael Phelps.

One of the standout positives on the fit is the long time wear comfort. It’s incredible. Even at the end of a seriously long day on the bike my feet feel fresh. For me, having come off the back of the Sidi Adventure, I think they’re more comfortable. They have less reliance on the leather holding shape, so they are less likely to dig in. They haven’t lost or changed shape either and because of the higher stiffness index, they support me enough when riding long distances.

On the flipside, the X-treme is softer and has more flex than the typical top end MX boot and the only time they’ve had any sniff of discomfort has been on long dirt roads when I’ve been up on the pegs for an extended period of time. Normally at this point, ADV style boots are far too soft and the lack of holding around your feet and ankles is tiring. The X-treme is far better for this, but over long periods it became a little tiring.  However, in every other situation I don’t have enough words to describe how well they strike the balance between protection, comfort, flex and size.

Like all MX based boots, the X-3 isn’t waterproof and it doesn’t pretend to be. If you plan on gallivanting through rivers you’ll need to factor in an investment in waterproof socks to your purchase and whether that bothers you is dependant on where and how you ride. I prefer to use waterproof socks and have some breathing around my feet for hot weather riding.

The strength in the sole is a sat somewhere between that full blown Crossfire 2, Tech 10 level and the Sidi Adventure. The sole is a little softer, the ankle a little more flexible than most MX boots. In some situations that’s an immensely positive trait positive and in others it’s not. What the Sidi X-treme is, is a great compromise boot.

“In my opinion it’s the closest product to the ideal adventure boot, that I’ve come across.”

It’s narrow profile is really the golden asset here. It’s also makes changing gear dramatically easier than most MX boots. Whether you’re on the pegs or ripping road miles, slipping a foot under the gear lever is noticeably easier than most MX boots and that makes both on and off-road riding much, much easier. They aren’t as clumsy as a lot of boots and the ankle flexibility lets your foot move much easier so they slot under the gear lever and down to the brake without being awkward.

That smaller profile is a result of the boot being physically a little smaller and that makes it lighter than most MX boots too. When the riding gets nasty the X-treme is also really good. They keep your feet tucked out of the way and thus it’s much harder to catch on rocks and sticks. Over the course of long day the low weight and slimmer profile are substantially gentler on my old, desert battered joints and back. It’s only half a kilo on each foot but it’s really noticeable.

Like a lot of Sidi’s, living in the X-treme and being on the bike for multiple days in a row is a very pleasant experience. Getting them on is easy and the buckle system is awesome. They fasten easily, come undone without murdering my fingers and are generally user friendly for wearing a lot. Despite the buckles being made of plastic, they have thus far proven to be extremely durable and have never come undone. There is good adjustability in the buckles and the design for adjusting them is fantastic. It’s a little cleverer than the normal wiggle back and forth to adjust, instead utilising a clip that unlocks and locks. It means dust and mud don’t really limit the adjustment either.

The level of impact and rotational protection feels great. Around your leg there is plenty of TPU protection. It holds your leg well and keeps you feeling protected. The articulated pivot in the ankle is also great. It really feels like it works, allowing your ankle to move in the direction it should whilst limiting the lateral motion appropriately. The top of foot area has a little more open leather than something like crossfire. It’s pretty soft leather too and is probably the primary reason they’re so comfortable.

The SRS sole system is another top feature of the Sidi X-treme. I’m typically very tough on boots soles and so far it’s lasting okay. It’s a got a middle of the road lifespan but the best part about the SRS boots, is the simplicity of replacing the sole. Using half turn screws the sole can be removed and replaced, or fitted with a different type. Sidi make a Supermoto and an ‘Enduro style unit. This vastly extends the lifespan of the boot and for me that’s awesome. The standard sole has performed fantastically, gripping the footpegs and providing a really reliable hold. I’m yet to slip off the pegs, even riding in the Aussie snow and crossing dozens of rivers in the Outback.

The final huge positive with X-treme is the level of feel and feedback you have. With that little more softness you can feel everything. Feeling the gear lever, the brake pedal and the footpegs is easier and so it’ll take less time for those who may be new to an off-road style boot to adjust than it would if you’d just strapped yourself straight into a Tech 10.

The X-treme is a boot that I think works for all adventure motorcycle riders. I feel its strikes an awesome balance between comfort, protection and usability. Compared with the competition, it’s useable for those coming from a road riding perspective whilst providing vastly improved protection. If you’re coming the other way and are comfortable in a top-end MX boot, then you’ll find yourself with a boot that still has great protection but is supremely comfortable and versatile, making road riding easy and allowing you to get out and about to explore sights without being clumsy.

In my opinion it’s the closest product to the ideal adventure boot that I’ve come across. The Sidi X-treme offers a level of protection that is actually useful on dirt, whilst still be useable everywhere else and that’s a step up from what I feel most ‘Adventure’ branded boots offer. It’s ticking almost all the boxes and scoring highly in the other areas. It’s a quality, well made product, with an outstanding lifespan, high comfort level and well designed features. All of that adds up to, what I feel, is an exceptionally good value product. It isn’t cheap but it’s fantastically well made and comfortable. When you factor in the incredibly easy to replace sole, the boot has a huge lifespan.

The only negative I have is that it isn’t quite as good as stiffer MX boots when stood up constantly for a long time. I do feel that negative is outweighed by the immense positives because the X-treme is far better off the bike or on the black top than any other MX boot I’ve used. It’s a boot I can’t get enough of at the moment and I don’t know if Sidi realise what a great adventure focussed product they’ve made.

For more information on the Sidi X-treme click here.