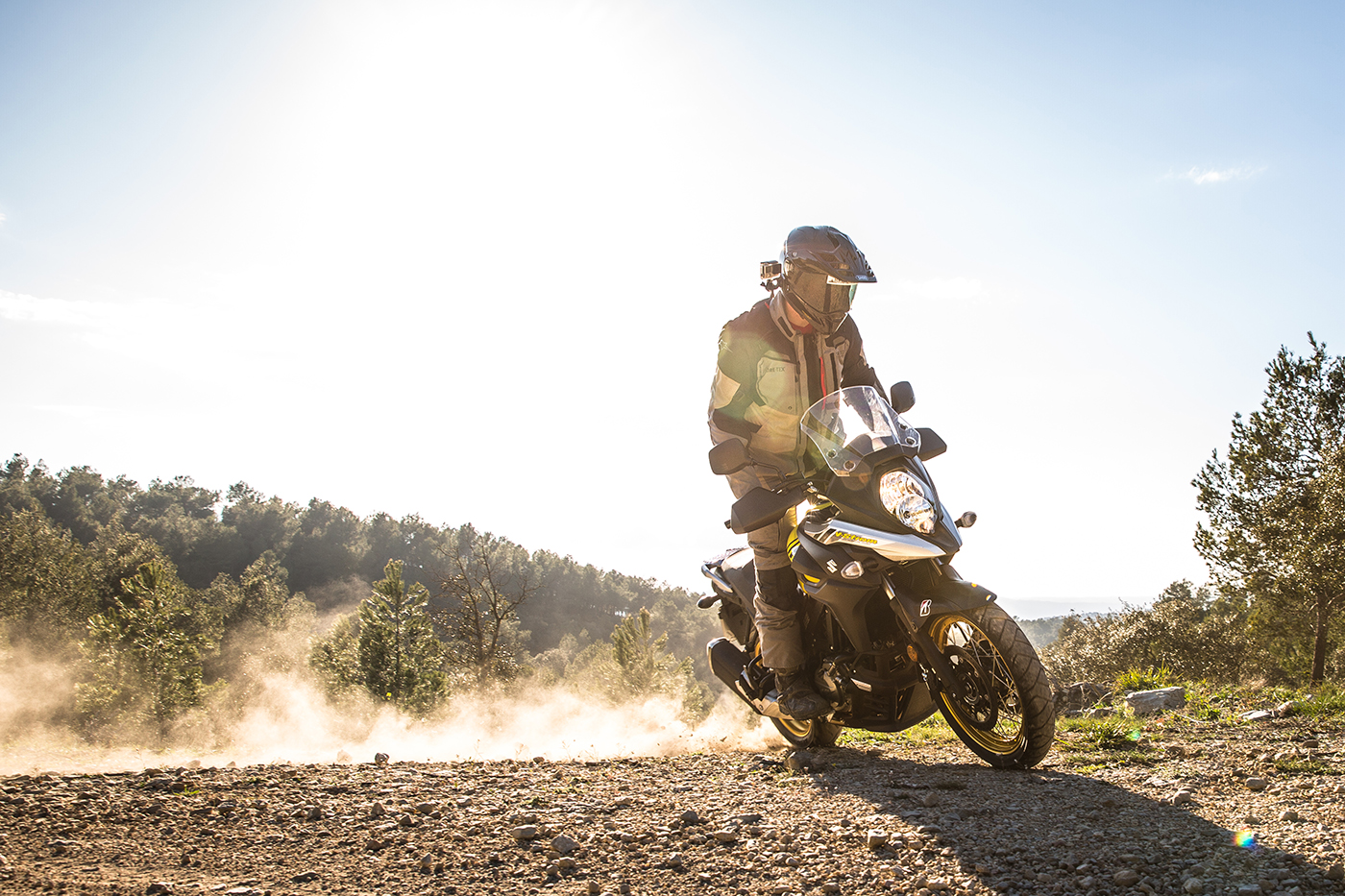 Llewellyn Sullivan-Pavey
Editor
Photographer, Videographer, Writer, Motorcycle Racer, Dakar Rally Finisher and BRAKE Magazine's big dog, Llewelyn really likes to do things involving motorcycles. He also likes bicycles, coffee, pop punk and making horrendous puns.
The Suzuki V-Strom 650 is a bike that has always been just so. It’s a bike with a strong existing image of being a sensible, functional and great value bike; a bike that does what it is meant to and not a huge deal more. It lacked that something that made me excited to ride one.

When testing bikes context is everything. Putting a bike in an environment that it works can be transformative for opinion. For example, if you take a litre sports bike through the city, or to the top of dirt track on mountain and it’ll suck. You wouldn’t do it because it is an inherently dumb idea. It’s not that it can’t be done, but that you’re asking a whale to go for a walk across the desert.

Now there is a point to this rambling and don’t get to excited by this statement as it’ll require some qualifying. The V-Strom 650 is a great bike.

Move away from the comments box for a few moments longer tiger, there is some explaining to do, but the crux of this story is exactly that. You see, all my previous V-Strom experiences have been out of context. They’ve been a V-Strom in a GS territory. They’ve been a V-Strom up a dirt track in the depth of a forest or a V-Strom on an icy winters day without heated grips. They’ve not been a V-Strom basking in the afternoon sun in a metaphorical bikini on a golden sandy beach.

That’s the point of this extended intro. Suzuki put the V-Strom in an environment where it shone far brighter than I knew it could. The riding was endless epic ribbons of grip tarmac that cut across the hillside for 227 km of second, third and fourth gear corners. Did it make me think the bike was different? Has the core V-Strom become a radically different machine? No. The difference is that now it’s apparent just why the hordes of V-Strom fans have so much affection for the little 650 twin.

The Updates.
The V-strom has been a bike that specialised in being a solid bike for not a lot of money. A bike that does stuff well and no more. If you’re a V-Strom fan, rejoice. Almost none of that has changed. While the changes are plentiful and the Japanese engineers have clearly been doing their work, the crux of the new model update is a step into Euro 4 emissions, some tweaks, upgrades and a hefty styling update. It’s new not different.

The penguin style beak has gone and the little V-Strom 650 now looks almost identical to big brother. There are new colour schemes and the same two model lines, a stock cast wheel version and the aluminium spoked wheel XT version. Performance is identical. Aesthetic is more Adventure on the XT.

Euro 4 also meant a host of new goodies have been added to the 650 too. The engine got a chunky update, 60 new parts to be precise. That means a touch more power and torque across the dunk curve despite the more restrictive exhaust. Traction Control has also been added to the package. It’s the same system as big brother, using the same dash and switch gear to control everything. The new aesthetics bring a manually adjustable screen a new narrower but still comfortable seat design. The seat height is medium at 840 mm, with low and high options available that sit at 810 mm and 870 mm respectively. Suzuki have also shed a single kilogram from the weight and added a new, super snazzy single button push start system. A prod of the start turns the bike over until it starts for you. The days of holding the start button until your bike fires are numbered. The last real new addition to the V-Strom pie is ‘Low RPM Assist’. When releasing the clutch the DL picks up the revs slightly to make stalling a junk load harder and slow speed riding less likely to result in a stall.

The Ride.
This review started with a bold statement. I called a V-Strom 650 great. It’s a bike that is renowned for not being exciting, for getting the job done without fuss. It’s a relatively budget bike and honestly that hasn’t really changed.

The handling is incredibly neutral. Everything is very safe. The handling is nimble without being quick. The DL 650 doesn’t drop into corners yet there is no requirement for effort to be used to get it turning. The lean in is very linear, very smooth and predictable. The predictability quickly builds confidence because it doesn’t do anything strange, not one thing. It doesn’t move around, walk on the front, sit up or drop in. It tracks beautiful smooth arcs from corner to corner, changes direction quick enough and feels stable enough all the time. It feels very V-Strom.

The suspension is a big part of that stable, predictable handling. The suspension on this ￡7K bike was one of the biggest surprises. Now don’t get me wrong here, it’s not going to win you a MotoGP race but it’s surprisingly well controlled. Budget bikes are very often the opposite. Take the F 700 GS, a pretty close rival. Where one feels like they forgot to put oil in the suspenders, the V-Strom is planted. It doesn’t dive too much, doesn’t squat much under bum. It’s good around town and better on a twisty mountain road that it has any right to be. It’s good enough that it didn’t want adjusting and that’s a bold statement. A little preload adjustment was in order to keep the load balance between the front and rear ends but if you aren’t pushing 100kgs you’ll doubtful need that.

The Engine.
The 650 twin is well powered at 73hp. It’s never going to drag you flapping into an adrenaline induced coma but for the class the little twin is blessed with a smooth, strong torque curve. The power deliver is buttery smooth from low RPM and pulls cleanly right to the top end. The EFI is very well set up and Suzuki need commending on that. Rolling on and off the throttle is perfect, with the only jolt coming through slack in the cable. Until they upgrade to a fly-by-wire system it can’t get much better. The V-Storm makes the most forward progress when revving and being a little 650 you’d expect it to be useless at pulling gears but it isn’t. Use of the gearbox is still a requirement; you can’t expect it to be a SuperDuke R where you really only need to use one gear, ever. You’ll find yourself up and down the box a fair bit on a twisty road but you can, if it suits you choose a number of gears for any given situation.

Open roads aren’t an issue either. Cruising at legally acceptable motorway speeds is perfectly comfortable, as is the riding position. The cockpit is on the cramped size, especially as a human over 6ft but the ground is relatively close. The updated seat design is just as comfortable as always, only now it’s a less wide between the thighs.

In fact, the only performance aspect of the bike I’ve got to moan about is the front brake. The front stopper is clearly a budget unit. A lack of power isn’t the issue, it’s more a lack of feel. The wooden feel is not something I’m a big fan of but on a budget bike like the V-Strom it’s not a deal breaker. You can still get slowed down in plenty of time but it doesn’t feel quite as deft as the brakes you’ll find on other bikes.

All that adds up to a bike that isn’t doing anything remarkable but it’s doing all the elements of being a budget sport tourer really well. Putting it in the correct box is so very important to understanding why I think the V-Strom is a great bike. It’s a sport tourer, a bike you’ll ride to work and then use to hit the twisties on a Sunday. It’s the same bike that’ll get you a few days down the road in comfort with little fuss. It’ll do all that and it does absolutely nothing to hamper your enjoyment.

The press introduction was run on quite simply, some of the best tarmac you’ll ever ride and the V-Strom let you enjoy every single inch of it. You can ride right to the limit of the environment and yourself and the little 650 doesn’t detract from the experience. It’s a bike you can dominate and let the riding do the talking. It’ll never be a bike that put a grin on your face with ridiculous power or outrageous handling but a no point, not one corner in 230 km of corners, did I feel like the bike was reducing the fun.

It was an epic day riding on bike that costs ￡7800. Would it have been more exciting on a SuperDuke R or some other legendary, ridiculous bike that costs twice as much? Possibly. Would I have had￡7000 more fun?

Not on your nelly.

Conclusion.
If you look at the V-Strom out of category it can be quickly found wanting. Put it down as an adventure bike, where some off-road prowess is important and this copy would be very different but that’s not the intention. It isn’t an Africa Twin rival, it isn’t even pretending to be.

The point is for a person who wants to commute or be a weekend cruiser, amble longer distance, be comfortable and not haemorrhage money the V-Strom is a strong class contender. It’s a do it all bike that doesn’t detract from the riding experience and that’s awesome.

It could be prettier and more polished, it could have more bells and whistles but then those bikes exist and cost a junk load more. In terms of riding performance you’ll find little to moan about if you buy a V-Strom. I’d probably like more punch from it but as a budget, small road bike it performs well and didn’t hold back the fun of riding a motorcycle. For me that’s all it needs to do.