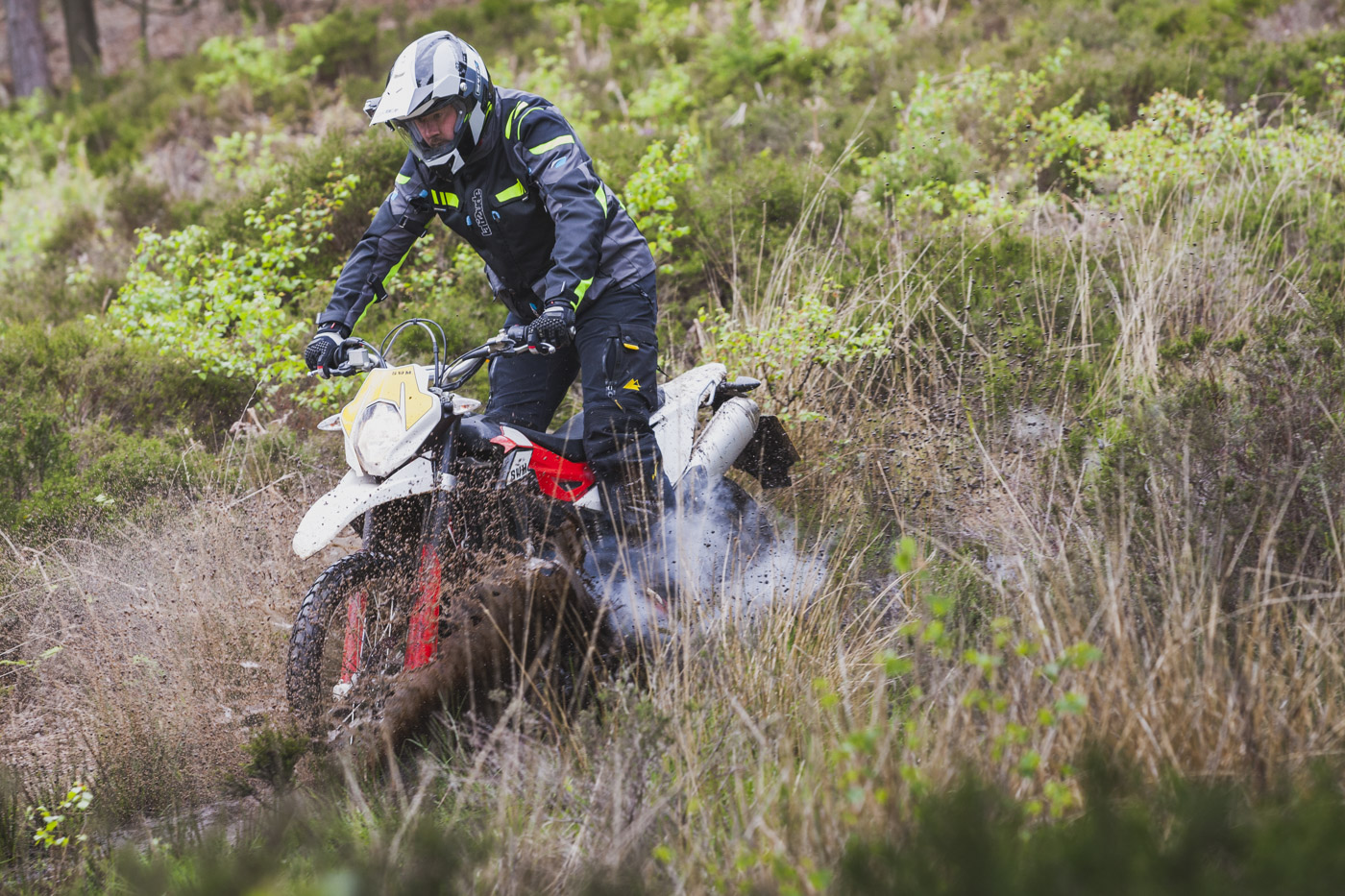 Neil Hawker
Tester
Former REME member, longtime Enduro racer and general funny man, Neil joined the adventure riding community in 2012. An incredibly skilful and thoughtful rider, the Englishman brings a fresh perspective to the travel riding world through an unrivalled enthusiasm for everything in front of him.

Speedy Working Motors. Sounds amazing right? While SWM are not a household brand, the Chinese owned company are pumping out pre-KTM era Husqvarna models. The current flagship of these is the competitively priced SWM RS 650 R. We took the single cylinder, Italian built machine into the deepest, darkest corners of Dorset to find out if it was worth the money.

The rebirth of the SWM brand is a confusing situation. When KTM purchased the name rights to Husqvarna in ’13, the deal came with a factory in Varese, Italy. Through many complex deals, sales of plans and so on, the former home of Husqvarna now builds and sells, pre-KTM era Husqvarna models with SWM branding. The bikes they build are the ones that used Italian designed technology rather than the BMW based engines.

The SWM RS 650 R is essentially a redefined Husqvarna TE 630, using the same tooling and still built in the same factory in Northern Italy. There are minor styling tweaks here and there but theoretically it should be a very similar ride. The old TE 630 was a popular dual-sport bike and so it stands to reason that the new RS 650 R is equally capable.

The power plant is a torquey 600cc single cylinder four stroke with fuel injection. It tips the scales at a light 144kg, with a 12 litre fuel tank. It’s held up with adjustable Marzocchi forks and a Sachs rear shock that puts the seat height at a relatively high 900mm. The controls are surprisingly good components, with the same Domino grips that have graced Husqvarnas for years. It’s finished with a Magura hydraulic clutch and Brembo brakes. On the surface, the most impressive part is the very low price of £5699.

When you add in the two year, full parts and labour warranty, that great price point and the low weight, the SWM sits in a very unique position in the single cylinder dual sport market. It’s less powerful and more gentile than the 690/701 models from Austria and next to the KLR and DR 650’s it’s far lighter and better specced. With Yamaha discontinuing the XT 660 and the BMW doing the same with the G 650 GS, SWM have the opportunity to make a class winning bike.

The, longer travel suspension, off road bias of the chassis design and styling would on paper, suggest that the road going capacity of the SWM is limited. Frankly put, that’s not a huge distance from the truth. That also doesn’t mean it’s a bad bike, not by any stretch.

On the narrow, small and winding country roads of Dorset it’s capable, comfortable and more than doing what it needs to. Dorset on a bike is great experience; its winding country roads cutting through thatched cottage villages and coastal hill views offer some quintessentially British riding. It’s riding that the SWM fits in perfectly.

It’s generally a very easy bike to ride around on. It’s friendly and comforting, plodding along through avenues of trees without stress or worry. It makes the experience of riding one that doesn’t require a great deal of effort or thought. It’s great at cruising and letting you soak up your surroundings. It’s an off-road biased bike that is comfortable on road.

What the SWM is not good for and this shouldn’t be a surprise, is riding fast. When you start to push the speed on the tarmac it becomes hard work. Absolutely nothing about the SWM encourages you to ride fast. It doesn’t want to fly into every hairpin at 120km/h (80mph) and scramble for grip on the edge of the tyre. Tipping into corners at speed is not a confidence inspiring experience. It’s twitchy, dirt bike like and always feels like it’s trying to slow you down.

It’s not a characteristic born from the speed or power of the engine. That’s plenty powerful enough and will pull you up to 130km/h without drama, pull past cars and traffic but when you stat push in the corners, it feels like it’s understeering. That could be a spring to body weight issue but ultimately if you’re trying to shred on the SWM then you’re likely doing things a little wrong.

The rest of the bike on road was good. It didn’t suffer from excess suspension dive under braking. The engine is big, lumpy single cylinder and that comes with a basket of expected traits. It’s a touch agricultural but it plods along with nonchalant comfort. It’ll drag you out of corners well and has no problem with sitting at highway speeds. It’s got some serious engine braking but that isn’t a bad thing either.

On top of that, the brakes are truly terrific. Powerful, good feel and effective at getting you stopped. When combined with the non-threatening exhaust note, it made a superb bike for being a quiet, inoffensive motorcyclist. For a lot of riding, that’s a very, very positive thing. Unsurprisingly, the lack of fairing and general wind protection isn’t ideal at speed. It’s blustery for big straight roads and anything more the 105km/h (65mph) is tiring. The on top of the bike riding position doesn’t help with this and neither does the lack of hand guards. The biggest problem with the SWM once you enter the traffic washing machine and try to spend any time doing speed with cars is a feeling of vulnerability. It’s a much better and more enjoyable ride when you’re lost in the hills than jostling for position in traffic. It lacks the presence or engine punch to be a dominating figure.

When you push the riding difficulty on the dirt the SWM performed admirably. The whole chassis feels low. It’s low to ground under the engine, the riding position is squat and the seat height somewhere in-between. It means that catching the underside of the bike is, compared with a 690 KTM say, relatively easy. The flip side of that is it’s balanced and stable on dirt roads. It doesn’t wallow around and holds the ground well.

I always felt like I was in control of the SWM RS 650 R and that the wheels were easy to place. It’s generally uncomplicated to ride, even in more difficult and challenging terrain. Squeezing the bike through ruts wasn’t too hard either, with the only let down being the tyres. A huge portion of that easiness is the engine. The heavy engine braking means that the bike wants too and often keeps things at a very controlled pace. It doesn’t really run away from you ever, the gearing never makes you feel like it’s trying to drive you forward and that is why it works so well. It’s not a style with which I would typically ride, but I regularly found myself letting the bike do the work, letting it hold its own pace on downhills instead of using the brakes and so on.

Like on the road, when you try and force the SWM RS 650 R to up its pace it doesn’t like it and the bike stops working so well. It’s definitely not designed for speed, it’s not built in the shadow of the Husky 701 Enduro and that’s a very admirable trait. The slow and steady characteristic forces you to slow your approach down and it removed the hooligan in me. It plodded along and still made me smile, without me needing to ride quickly.

Likewise when clambering up slippery, bluebell covered grassy hills, the SWM did most of the work. It would thump it’s way to the top of everything we through at it, getting unbelievably good grip and being gentle with the ground. We didn’t leave a tyre mark on any trails for days. The relationship between throttle and engine is also very learner friendly, with good feeling and very little evidence of bad fuelling. The only change we’d make if the aim was to ride lots of slower, technical riding would be to change the gearing. At slow speed it’s geared tall, meaning you spend a lot of time controlling the pace with the clutch. In stock trim it’s a balance.

The suspension is very good for the price range. It worked admirably in keeping with the rest of the bike. At the pace the bike wants to move it’s very happy, with the shock feeling especially good. The adjustable Marzocchi forks and Sachs shock are stiff enough to cope with medium hits yet it remains plush in the first part of the travel. It does a decent job of soaking up the smaller rocks and roots which makes the majority of the riding experience comfortable.  Things started to become a little more wild when the speed increased but that’s pretty much the underlying theme here.

On the whole, the SWM RS 650 R was a huge surprise. When it turned up on our doorstep, it looked a little disappointing. That however was an entirely unfair judgement. The bike is at £5699.00, fantastic value for money. It’s not the best at anything, it’s not brimming with anything but it gets the job done. It’s easy to ride, with a little work and some decent soft panniers, it’d likely be an incredible little travel machine.

There are couple of bits we didn’t like, the cheap levers for example, ruin the hands-on experience of otherwise good quality components. They UK importers had fitted huge risers, that for the first time in Brake Magazine testing history, were a good thing as the stock position is very low. The length of the bolt required made us nervous and they never felt strong, with a lot of flex when under heavy braking. A few other bits of design are in keeping with the price, mostly the ugly exhaust and side stand but they aren’t deal breakers.

The rest of the bike works well too. It’s agricultural, sitting somewhere between a KLR 650 and a KTM 690R but it always gets the job done without being fancy or fast. It’s fun to ride but not exhilarating and for a lot of you, I imagine, that’s damn near perfect.
What do you think? Would you buy one? Comment and let us know!

For more information on the SWM RS 650 R click here.