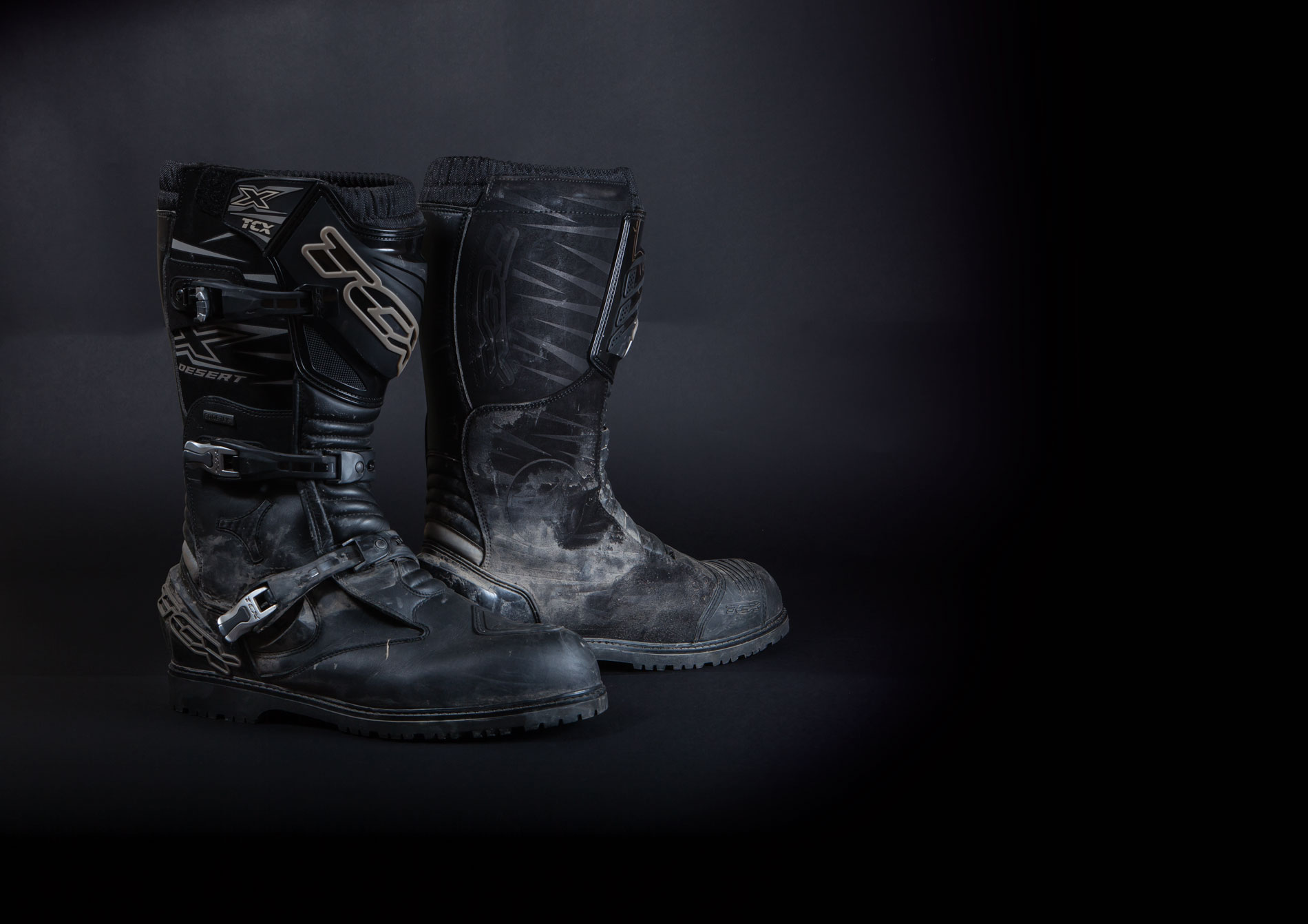 Jonathan Pearson
Former Features Editor
JP is a master of many tricks. Working as a bike journalist, he's been testing, analysing and writing about on and off-road motorcycles for various UK magazines, both as a staffer and a freelance journalist, since the nineties. Testing everything from Valentino Rossi’s MotoGP bike through sportsbikes, commuter bikes and, of course many, many miles on adventure bikes. JP has also spent much of his life competing at up to International level in trials, enduro, extreme enduro, circuit racing and hillclimbing. He also instructs at the Off Road Skills motorcycle training school, coaching and encouraging people in the ways of riding adventure bikes. Also a fan of vegetables and sea products.

Italian boot specialists TCX have been kicking about (pun intended) for a while now. Beginning their bike boot making life with just road race boots (originally branded Oxtar until Alpinestars claimed it was too close and threatened legal action), the TCX line-up has grown over the years to cover all bases from road to speedway and TCX now rival any boot manufacturer on the market, including Alpinestars.

Among other things manufactured by TCX are those specially molded race car seats F1 drivers are fond of and army boots. Both of which should strike as a measure of quality of the TCX product – if the military trusts them to make boots then frankly they can’t be too shoddy.

The X-Desert boot fits into our remit here at Brake Magazine, aimed as they are at Adventure riders. As part of the ‘Touring Adventure’ line the X-Desert features TCX’s ‘Comfort Fit System’ (CFS) which has a design philosophy behind it no less: to be comfortable in any situation. CFS basically means the boot is designed and then built around a foot-shaped mold on the production line. A mold that changes with boot sizes and with gender (although these boots are not available in women’s sizes).

What does an adventure boot need to be classed as a ‘good’ Adventure boot? For us the criteria should include all the obvious things like being well made and constructed of a durable material. They also need armour on the shins and a decent amount of ankle, toe and heel protection as well as having a durable, grippy and strong sole, strong buckle system and would ideally also be waterproof but not too hot. We also need them to be comfortable to walk about in for long periods. And, most importantly, they have to look a like off-road boots rather than a road one.

So are they comfortable in any situation? I’d say so, yes. I’ve had them a while, a year or more in fact, and I’ve had healthy amounts of time riding as well as walking about in them. Among other more mundane riding trips I wore them for a few days spectating at the Scottish Six Days Trial where I had stacks of both riding and walking. I came home with dry, blisterless feet after four days with hours in the saddle and walking across boggy moors, through rocky streams and in all sorts of Highland weather.

Plastic armour on the heel, shin, ankles and toes keep your lowest regions impact protected where they need to be – though these are a step away (another pun intended) from a fully armoured-up motocross boot. I can’t claim to have tested the crash protection but I have worn them off-road plenty of times and inevitably have biffed a footpeg or two with my shins and taken the odd ‘healthy’ dabbed foot down when I’ve suddenly lost grip. Each time I’ve felt cushioned and protected inside, particularly when I’ve slammed my foot down hard on the deck. At times like those you know if a boot fits and buckles up well or not because it’s easy to find your big toe slamming the end of the boot or too much movement inside. I haven’t found that an issue and the buckles themselves are secure but easy enough to click in place or undo.

Along the line in TCX’s boot range are other boots which have more in the way of external armour but are subsequently stiffer to walk in and less flexible or comfortable. The X-Deserts are a natural progression somewhere between the MX boot and softer touring road-based boots and to that end they fit the bill. There’s also a similar-styled Track Evo but which has less armour and frankly aren’t as cool, because looking the part is important right?

It’s a tough ask, particularly being comfortable to walk in and protective. But the X-Deserts seem to pull it off and I’m hard pushed to find any major fault with them. You could argue these Gore-tex lined boots are too hot in blistering weather, I wouldn’t recommend them for crossing Death Valley, but for all-round use I personally would trade hot feet for wet, cold feet any day.

Some people who’ve worn the X-Desert do report discomfort (rubbing and pressing) where the boot folds or creases (on the side) through walking. This hasn’t happened with mine but I must add my lower leg is a tad skinny. If you’ve got broader calves, which fill the boot more, it’s something to be aware of.

If I were being picky I’d pick on the heel too. With no other shoes or boots in my life with any sort of heel on the sole I do feel a little conscious of that extra bit of height always when I walk. Practically, on the bike, I can’t see too much need for a heel because the ‘enduro’ sole is grippy even on a wet rubber footrest.

But otherwise? It’s hard not to be impressed with a boot that achieves all it sets out to do and which full-fills the equally important remits of comfort, protection and durability both on and off road.