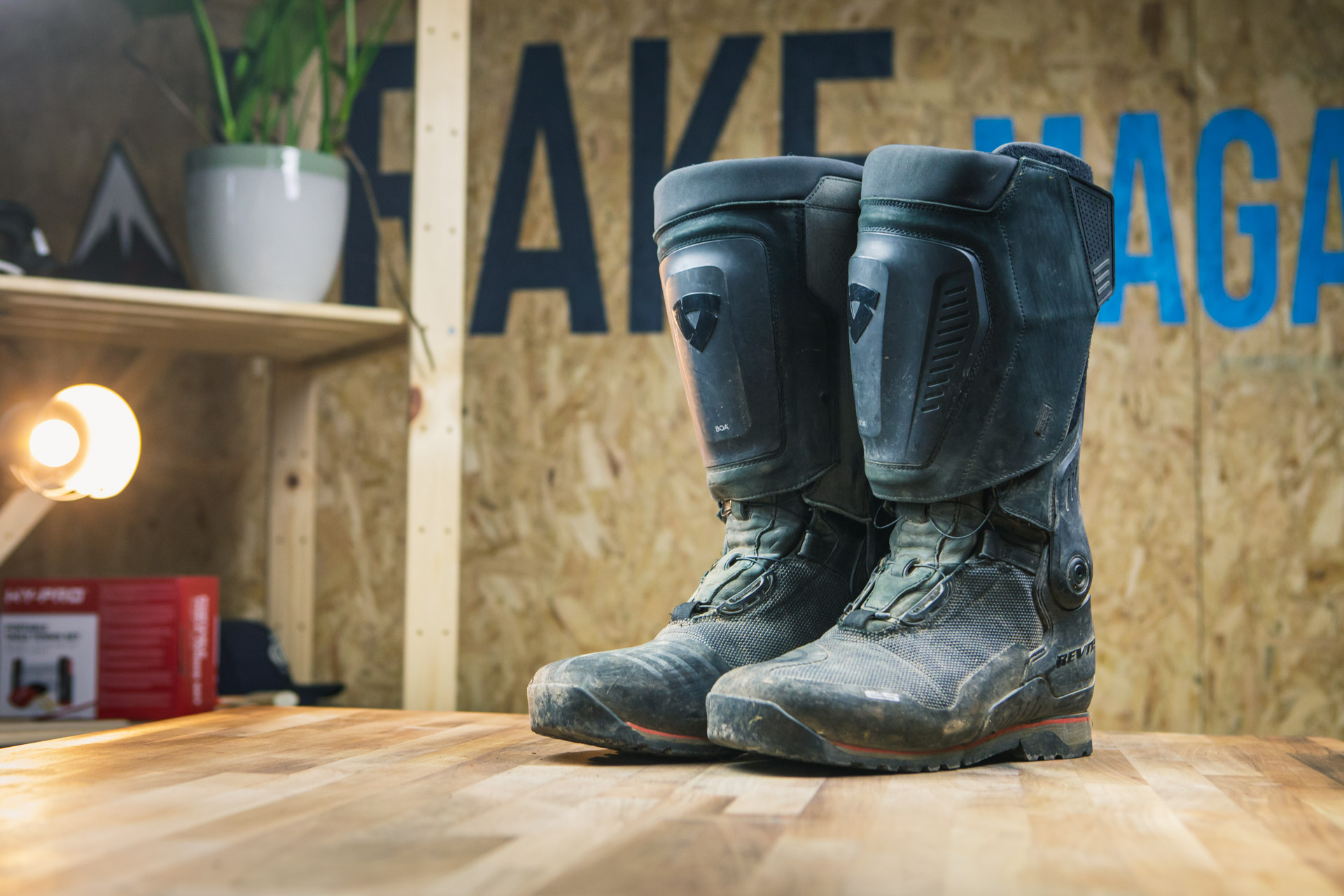 The REV’IT! Expedition H20 is a unique boot. REV’IT!, the dutch company who design and manufacture them have gone against the grain with both design and ethos, resulting a unique and extremely good product.

One of the biggest challenges with an adventure motorcycling boot is the balance between comfort and protection. For the most part ADV boots swing away from the MX boot levels of protection. Even class leaders such as the Sidi Adventure and Alpinestars Toucan are soft in comparison to their top of the line MX counterparts. They’re both great boots but for the heavily off-road focussed riding they’re on the soft side.

It’s why many ADV riders turn to boots such as the Astars Tech 7 or Sidi MX boots. When it comes to ADV riding however the biggest complaint is the lack of waterproofing and the lack of off-bike wear ability. So REV’IT! have taken these points into consideration and won a RED Dot design award for their efforts. The Expedition H2O is built with a stiff, protective outer framework called the Dynamic Support Frame. It’s a stiff calf, ankle and heel support structure with an ankle pivot much like a high end MX boot. The idea is that it’s stiff and offers impact and rotation protection while still allowing you to walk and flex your ankles whilst riding.

The Expedition also has a hefty shin protector and solid toe box protection coupled with a softish mid-foot area to keep the comfort little higher. REV’IT! have also made the boot waterproof through a Hydratex®|Sphere membrane and are using a Vibram branded sole for grip and a boot closure system from BOA® in place of traditional buckles.

“My favourite part of the REV’IT! boot is just how protective it feels.”

This is probably the most left-field departure in the REV’IT! boot. BOA® closure use wire laces and a ratchet system to tighten and release. It’s quick to do up, quicker to release and something you’ll find on cycling shoes and snowboard boots.

After thousands of miles in the REV’IT! boot, I’m very impressed. The fit has been fantastic. It’s plush inside and over time the ample internal foam has packed into my foot shape. Inside, the Expedition offers a roomy boot, with a tallish toe box that should fit most people, including those with wide feet.

My favourite part of the REV’IT! boot is just how protective it feels. For myself and the riding we typically do when testing bikes, the REV’IT! expedition is my favourite go-to ADV boot. The overall feeling is much stronger and stiffer than any other ADV boot I’ve tested, with the only part that’s softer than a middle range MX boot being the top of the foot. The result is that I’m confident in them when going is rougher and the trail a little more risky.

Taking a dab or falling over doesn’t make me nervous in any way. That combined with the effective waterproofing membrane makes for an experience that is more suited to the ADV rider looking to push their riding into challenging places.

The Boa® closure system is a very interesting choice, most notably because REV’IT! opted for a single BOA®. Single BOA® closure has one disadvantage over traditional boot closure. The system provides uniform tension throughout the laces which in practice means it’s impossible to tailor the tension across the boot. If I want my ankle tighter than my calf, I can’t really do that. In other sports, companies have rectified this by offering two or three separate laces but that adds quite a lot of cost. In practice it’s not a huge drama. I’ve typically found myself going for a middle ground and accepting it. After a few days of use, the change of system becomes normal and it’s doubtful you’ll ever look back.

The good points of the BOA®? Taking your boots off. A quick pop of the ratchet and the boot is fully undone. That, ladies and gentleman, is a tiny piece of progress that makes day in and day out use delightful. The days of cold fingers hurting when undoing buckles, or getting muddy hands are gone.

You may also find the entrance to the Expedition H20 tight. The tongue of the boot is sewn in such a way that it doesn’t open especially far and as such, for my feet, it’s a tight squeeze getting them on and off. The boots have a nice big pull tag to make the job easier but it’s still more of a fight than a traditional boot.

The last point of contention with any adventure boot is the sole and feel. People love a soft ADV boot because they can feel the controls and walk easier. Interestingly, the sole of Expedition ADV is comparatively thick and substantial feeling. The Vibram rubber provides plenty of good grip on the pegs and the ground, proving to be better for walking than any MX boot I’ve worn but the sole lacks feel on the footpegs. Where some high end MX boots such as the FOX Instinct have soles with different thickness rubber in different areas, the REV’IT! boot is uniform and solid.  A multi density style sole gives great feel of the brake and gear lever, something I think would improve the REV’IT! boot however for ADV usage it’s been effective thus far. Wear levels are also good. A year into wearing, the Expedition’s the sole is in great condition.

Last on the list of features is the waterproofing. It’s awesome to have a boot this stiff with a waterproof membrane. Unless I’m going river hunting, they’ve been dry since day one.  The membrane doesn’t come to the full height of the shin meaning that water deeper than a deep puddle will get in, so a pair of waterproof socks has still proved invaluable on rides with water crossings.

Across the board the REV’IT! Expedition H20 is a fantastic boot. For the rider who is after something with top class protection, some waterproofing and a little tailoring to life off the bike, it’s top of the pile. For short distance hiking, being public situations and combining that with riding peace of mind there isn’t really anything comparable at present.

There are some idiosyncrasies to the boot such the compromise a BOA brings and tight opening for getting them on and off but otherwise REV’IT! have produced something the world was crying out for. The only real sticking point is the price. At around £500, the Expedition H2O is a pricey boot. It’s up there with Astars Tech 10 or Gaerne SG12’s. With the ideas REV’IT! have implemented here it makes sense but it’s not going to be for everyone. That said, it’s currently my go to boot for ADV riding and until something knocks it off, it’ll stay that way.