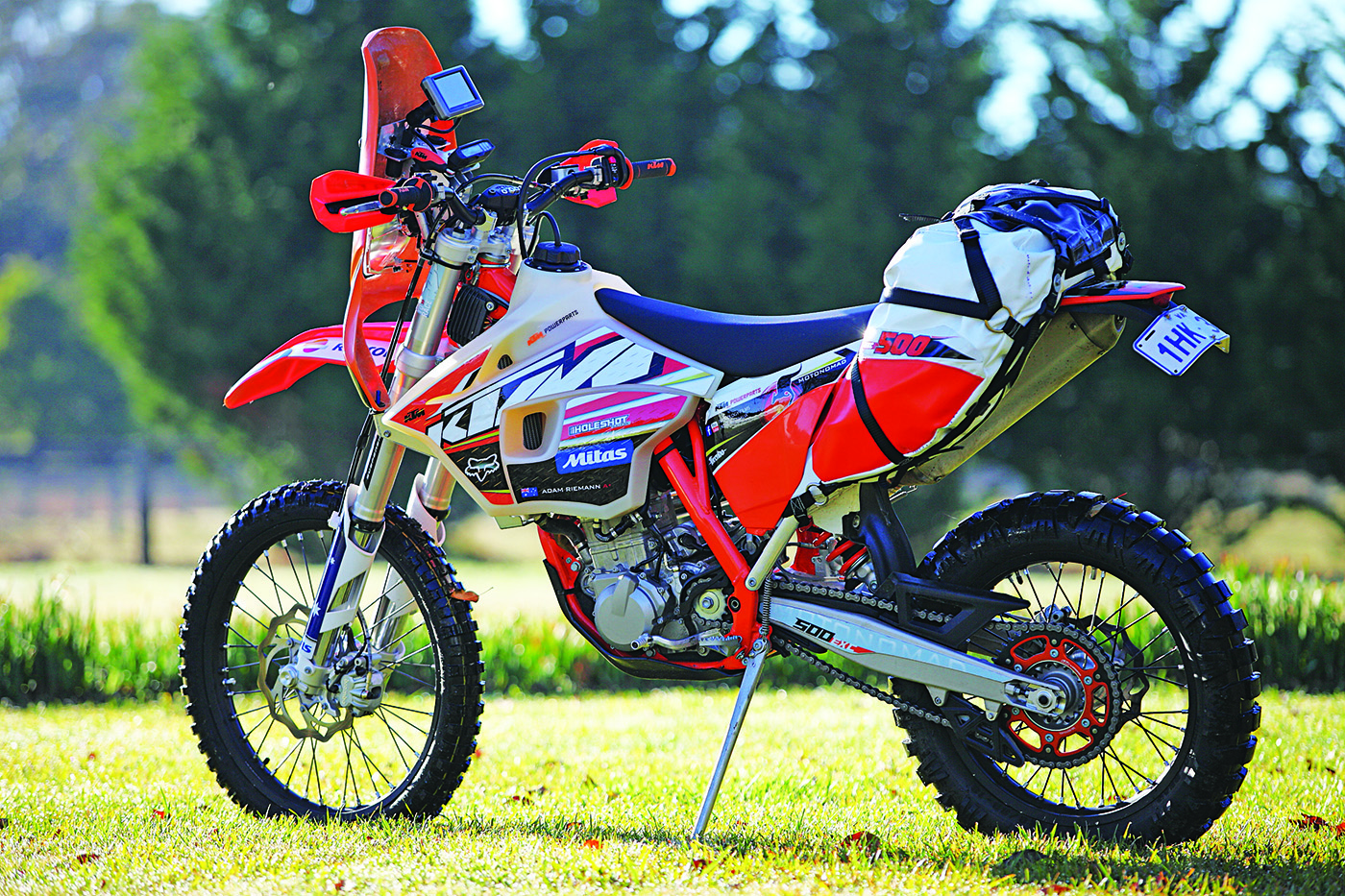 After Adam Riemann’s hugely successful debut feature film, Motonomad, our friends at Transmoto spoke to the ingenious Aussie to gain an insight into the modified KTM 500 EXC that carried him and his camera gear through the deserts and mountains of Central Asia – the exotic backdrop for Motonomad II.

“Looking back on the original Motonomad adventure from Austria to Egypt, it’s obvious how hopelessly unprepared we were. From head to toe, tyre to tyre, our set-up was so basic, it was more typical of what you’d slap together for a weekend camping trip. Even then, we didn’t take anything to cook with. The mere fact we rode 7000km across seven countries – in motocross gear – illustrates just how oblivious we were to the demands of extreme distances. I should’ve known better, but I was more focused on creating a film about the ride than the ride itself. That’s why most of the space in our backpacks and bikes’ luggage was consumed by camera gear. It was simply inevitable that we’d go without any luxuries for the sake of being our own, fully independent camera crew.

“It was simply inevitable that we’d go without any luxuries for the sake of being our own, fully independent camera crew.”

So, for Motonomad II – a 12,000km adventure through Central Asia – I’ve identified everything I didn’t like about the bike set-up I used for the Austria-to-Egypt trip, and corrected it. The result is “M1” – the lead stallion of a trio of 2015-model KTM 500EXCs. The concept behind M1 was simple: build a bike that could potentially hold its own in Dakar, conquer a few stages of Erzberg,
and carry enough surplus to allow its rider to live off it for a minimum of three days.

I’m confident in M1, as I am with its sisters, M2 and M3, which will be ridden by my good friends, Scott Britnell and Hein Schwartz. They each bring their own skills to the project, but more importantly,  M3 will be the dedicated ‘camera wagon’, where we’ll stow the majority of the filmmaking equipment.

Thankfully, our preparation is better this time around, but the Motonomad II trip is no sell-out. We’re still fully independent;
it’s just that our bikes are built to be more efficient and more capable of major overland crossings.”

In the original Motonomad film, the two 500EXCs covered 7000km. The second trip ran closer to 12,000km. So what does that mean for the engines in these hardnose enduro machines, which really aren’t designed for long, adventure-style distances? Riemann offers this insight into the mods, run-in and service intervals for the three 500s…

“The fact we’ll be covering such a lot of ground is why I decided to leave the engines standard. Seriously, aside from the taller gearing, they’re dead stock. We even left the internal baffle in the muffler. We contemplated adding a cush-drive on the rear hub, but decided against it in the end because we never had a drama on the original trip.

“The best way to look after an engine for a long trip is obviously the way you ride it. But the oil you put in it – and when you put it in – and the way you run the engine in, is just as critical. All three bikes did their first 50km just teetering around the block, making sure the engines heated up and cooled down several times. We changed the factory oil prematurely and filled it with quality Repsol oil. We then did a 300km recce run and another oil change. After that they were fully run-in and ready to crate up to air-freight to Kazakhstan.

“Seriously, aside from the taller gearing, they’re dead stock.”

“We also made sure the inline fuel filters were changed after just a few hours’ run-time, and we’ll be carrying a bunch of those with us – because we’re thinking that the fuel quality in countries such as Siberia and Mongolia might be dodgy.

“Given that the engines have been properly run-in and prepared – and because the tall gearing will be gentler on them – we plan on doing oil changes every 1200 to 1400km. Admittedly, that’s more than what the owners manual recommends, but so was the 2500km stint with no fresh oil in the original Motonomad trip! There’s no point complying with the manual’s guidelines if you’re filling the engine with crap oil, so we’ve actually planned to have a batch of Repsol oil air-freighted to a KTM dealership in Russia, our first major stop on the trip. We’re carrying oil filters for that first change, but will have them sent to Mongolia to meet us after that.”

Do a run up the freeway for a day on a motocross bike and see how wind-blasted you get. You’ll be hating life after two hours; probably less. Now imagine copping that for eight weeks straight, in heat and rain, all the while negotiating deserts and mountains. Adam designed and built fiberglass Motonomad screens out of pure necessity. They cut through the wind and make riding at high speed a far more pleasurable experience. Travelling big distances on a bike is one thing, but maintaining the motivation to repeatedly stop and set up camera gear is another reality altogether.

Adam’s self-imposed terms for mounting the Motonomad screen was that he would utilise all existing hardware on the KTM and make no mods to the bike’s frame or its engineering. The KTM PowerParts radiator braces became the perfect base-mount for the screen, and he only needed to fabricate two additional aluminium gussets to complete the unit. Meanwhile, the 19-litre fuel tank, straight from KTM PowerParts’s catalogue, was cosmetically and functionally perfect for the Motonomad fleet. Again, nothing has been modified on the standard EXC chassis, because I didn’t want to compromise durability.

Adam is far from an expert fibreglasser. A short-lived fibreglassing career (three weeks and a steep learning curve) culminated in the fabrication of three rally towers. Tucked in behind each of them, you’ll find $140 of extruded aluminium, a handful of stainless fasteners, and plenty of love. This Mad Max-style cockpit puts everything a videographer/traveller needs within reach while on the fly.  There are two 12-Volt power ports, navigation, speedo and a handy selection of tools. The real beauty of the screen and tower is the fact you could hold a cappuccino behind it at 140km/h and not have the froth blow off it. Comfort is key.

The baggage that the Motonomad crew used is also a one-off design. “I’ve packed my life onto a dirt bike many times, but never before has it all been so perfectly harnessed. These soft pannier bags are handcrafted masterpieces, fabricated specifically for the 500EXC by Scott Britnell. The durable bags are just another skill Scotty brings to the table.  They’re designed to carry a one-man tent, air mattress and sleeping bag, two spare tubes, 4 litres of water, shoes, jeans, a Fox hoodie, two Fox tees, toiletries case, brake and clutch lever, spark plug, air filter, brake pads, 14T front sprocket, oil filter kit, and enough free space to cram 2kg of food.”

Gearing an EXC to cover distance is a crucial modification. The bike is designed to cover all terrain, including slow speed signle track. That also means it runs out of speed early and revs hard at free-way speeds. “Standard gearing for the 500EXC is 13/50, but I’ve settled on a much taller 15/48 combo and retained the quality OEM O-ring chain. The standard rear sprocket is replaced by a 48T alloy-steel hybrid SuperSprox, which comes from KTM PowerParts. It gives you the durability of high-tensile steel, but with less weight. The tall 15/48 gearing lets the 500 purr along at 110km/h, and it’s good for 180 if needs be – meaning it’ll take the long-distance strain off the motors. I also left the above-swingarm plastic chain guide in place as it prevents the chain from ripping into the soft panniers.”

The last part of the conversion puzzle, is choosing the tyres. Tyres can literally make or break a bike especially when covering distance. When you’re covering massive off-road sections of desert or mountainous terrain, you can’t be preoccupied with nursing your tyres.  To solve the problem, Adam opted to run the Mitas E-09 hoops, which are built to take on the world. He’d tried other desert-spec tyres, but none were as aggressive-looking as these brick-spitters. “It was a fight to the death to fit the rear with bumbag-size tyre levers, so it’s safe to say it won’t come off the rim if I need to limp to safety on a flat. They’re coupled with Duro heavy-duty tubes, which were also supplied to us by the guys at Motorcycle Tyres.”

After the success of the original Motonomad, Adam had more leverage when it came to looking for support for his second feature film project. So, who stepped up and with what for Motonomad II? We offered Riemann the chance to acknowledge those who’ve tipped in…

“KTM was the major backer for the first film – both KTM Australia and KTM HQ in Austria, that is – and I was hoping the company would support me again with the 500EXC because, really, I’m not sure I’d want to do a trip like this on any other bike. After a little negotiation, I came to an arrangement with KTM Australia that involves them giving us three bikes, plus air-freighting them to our starting point at Almaty in Kazakhstan – which comes at a pretty substantial cost. KTM is also supplying us all the PowerParts and spare parts we need. That support has been fantastic, which is why I like to give them the authority over the graphics.

“For several years now, the guys from Monza Imports have sponsored me with Fox riding gear and casual clothing. And they were good enough to extend that deal to include both Scott and Hein for this trip. Monza is also helping us out with three sets of RST adventure gear.

I’ll be honest – I was initially reluctant to embrace the idea of ‘adventure riding gear’ because I was adamant that the ‘suburban adventurer dude’ image didn’t fit what we were doing. So I actually shut the idea down initially. The Monza guys sent me a set anyway, so I tried it out and … well, I’ve got to say the stuff is incredibly good. I only wish I wore this gear on the first trip. Seriously, it’s that comfortable and functional, and all three of us will be wearing a set.

GoPro is also involved again. They originally contacted me through my YouTube channel after seeing the footage I shot with their cameras on a Himalayan trip, and they gave me a few cameras for the first Motonomad trip. GoPro has upped their involvement this time around with six cameras and some monetary support for the film production. Their plan is to create their own short film from my footage. It’ll be aired through their channels to promote Motonomad II.”

You can watch the full Motonomad Series by clicking here.