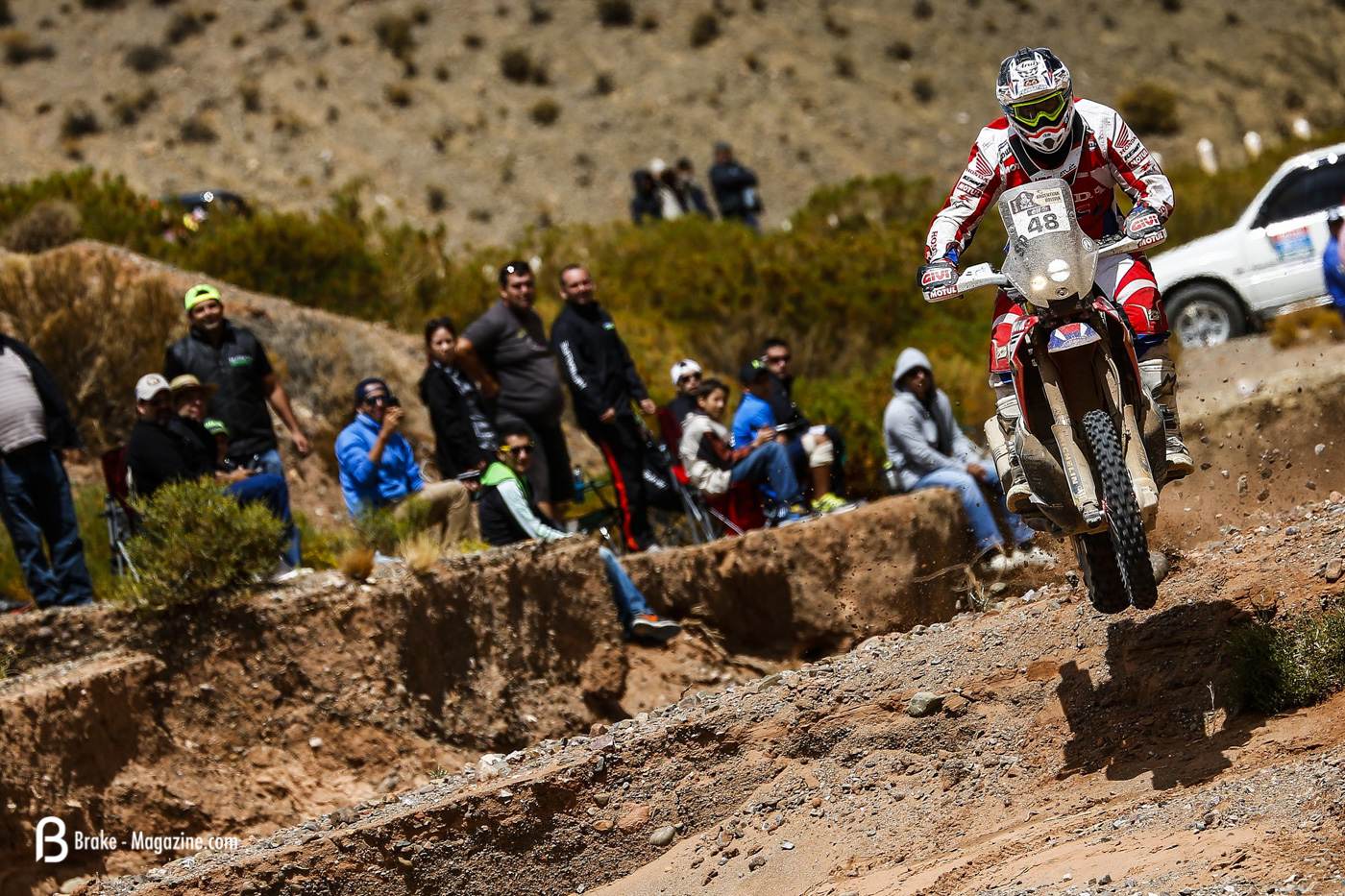 Stage Four of the 2016 Dakar is now in the History books. Joan Barreda rode like Joan Barreda does, setting the fastest time by a decent margin, only to have the win stripped from him for ‘several speeding offences’. This left the number one position to team mate Paulo Goncalves. Rueben Faria and Kevin Benavides made the top three, with Toby Price coming in sixth behind the demoted Barreda and very fast Antoine Meo. Ricky Brabec took his first top ten stage finish with a strong seventh place.

Sadly the big news of the day was the retirement of Pela Renet of Husqvarna. At KM 402 he crashed, rendering himself heavily unconscious. Renet was found by Laia Sanz, who arrived approximately 1 minute 30 seconds after the incident. After a few minutes he came round and was airlifted some 30 minutes later. He is currently in hospital with some head injury and other undisclosed trauma, all of which have been declared non serious, by Laia, ASO and his twitter feed.  Laia finished the stage 53rd, but will see her time re-instated.

Otherwise, it was again business as usual for the top 20 today. Once again Rodrigues seems to be suffering from his illness and was narrowly beaten by his younger, super fast team-mate Adrien Van Beveren who has also posses rather decent wheelie skills as illustrated in this video here.

Benavides is also performing the impossible still and remains second overall. If he keeps doing this we’ll start to forget he’s a Dakar rookie.  Stefan Svitko is still right there in 4th overall.

Tomorrow the riders are sent into the highest stage of the event and what will be a tough three days in Bolivia. The altitude is set to stretch to an unpleasant, headache inducing, chest tightening, 4600m in the racing stage.

Stage Five is also expected to see the first challenging navigation and off piste riding of the race in the open high plains. We can’t wait.

Just like the race at the front end, the privateers had a day that either played out with relative simplicity or went something like Apollo 13. Manuel Lucchese had a day of the latter after passing out on his bike mid-special stage which unsurprisingly resulted in a monster crash.

Manuel – “Today was a disaster for me. The altitude made me sleep in the special stage and I crashed badly.” Fortunately, on a physical level I have no problems, but the bike is really bad. I broke all the navigation equipment and then I broke the supports of the two rear tanks and opened a slot* in the front. Even the exhaust was almost completely detached, as was the entire navigation tower. I started to feel ill, I was foggy, I couldn’t see well and I felt a little tired. Then almost without realising it I passed out. I fell asleep. I woke up on the ground and the bike was a little way away.

When I got up I felt exhausted and I realised that my reactions were very slow. I was okay in a straight line, when I was on the gas but when I saw a corner and I felt I needed to brake, my reactions were slow. It felt like it took time for my body to respond. Also, when I wasn’t braking I had strength but when I pulled the brake lever, my fingers were light and I had no power. “

In the article on OmniCourse.it he goes on to say that he came across a few other riders late in the high altitude stage that he thinks suffered the same fate, including Renet.

*This was translated from Italian and we guess means he split the front tank.

The altitude suffering was throughout the ranks and like altitude so often does, it struck down with random vengeance. Hans Vogels had a nightmare, vomiting twice in the stage, Sjaak Maartens was seen on Dutch TV getting oxygen help and the reports coming back from the Bivouac is that altitude sickness was rife throughout all the categories of racing.

Chris Cork also had a nightmare, news of which hasn’t properly come to light yet, but he finished dead last, some 11 hours behind the stage winner. CS Santosh joined Renet on the withdrawals list. The only info we could find came from ADVRider contributor 640 Armageddon – “The navigation tower is broken and caused some short circuiting.”