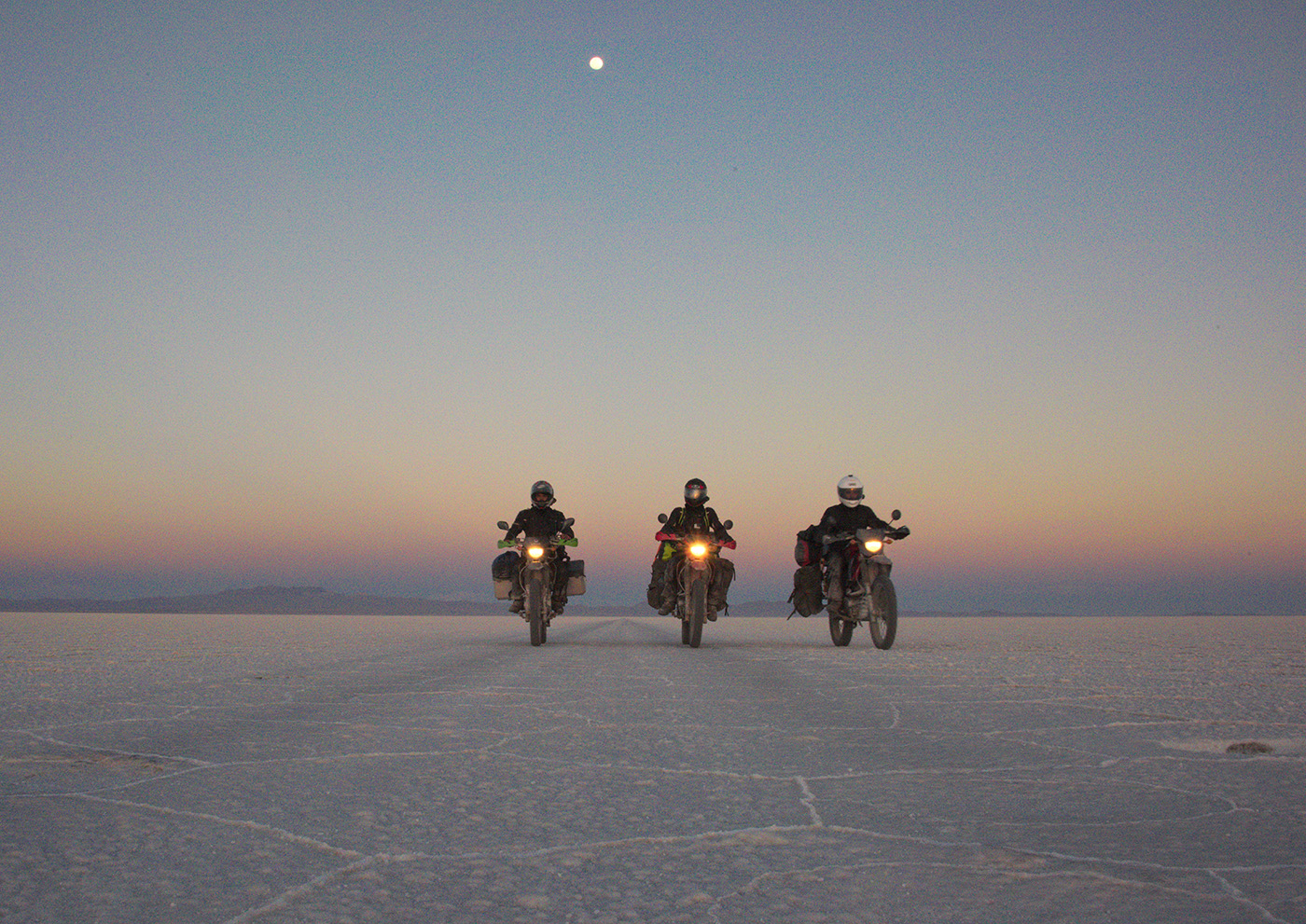 Tibet Fonteyne
Having grown up in eight countries, Tibet quit his job in August 2016 to try and rekindle some of the adventure that had been missing in his life since settling in the UK. He passed his motorcycle test only two days before leaving on a two month adventure through South America on cheap dirt bikes, hoping that his love for the outdoors, mountain biking, and racing go karts would go some way to help him hustle a motorcycle through the desert.

The Salt Flats of Bolivia have become one of the most iconic South American Travel destinations on earth. There is a mighty good reason for spots to become iconic travel destinations; they’re generally epic. Tibet Fonteyne, Alex Holyoake and Didier Smith left their jobs and came back with this awesome little slice of their journey through South America.

Every good bit of science needs a datum, a place to start measuring from. Whizzing around above your head right now is the NASA ICESat, a satellite responsible for measuring how badly, and at what rate, we are making sea levels rise by doing things like riding motorcycles. Because the sea moves around quite a lot it’s actually a difficult system to calibrate. In order to do so they need a very big, perfectly flat, non-moving surface in a place with no cloud cover. Salar de Uyuni in Bolivia is that place; it is the flattest place on Earth. This bright white spot on South America’s maps inspired Alex, Didier and I to leave our jobs behind and go for a two-month long adventure.

None of us, though, have a 1200GS nor were planning to get one. Adventures happen when you allow them to and in that spirit we would complete a trip through Peru, Bolivia, Chile and Argentina on three £1700 Chinese dirt bikes instead. The Cross Triton is not something Ewan McGregor would want to be seen on but it transports people from village to village all across Peru, so it seemed more than qualified for the job. Or at the very least, it would deliver the adventure we had craved after two years at a desk.

Deliver it did. After nearly a month of endless mechanics, tow straps, and inner tubes we rolled off Chilean soil into a country that stores 70% of the world’s Lithium reserves in it’s salt flats. It was the evening before the Day of Salt.

We crossed the border into Bolivia about a week after we had planned to, after a day of climbing up the Andes. The Uyuni salt flat has a little brother, Salar Coipasa, to its North. The two salt flats make up the only reasonable way to get from the border to the tourist town of Uyuni, to the East of the large flat. We followed the GPS co-ordinates given to us by a Chilean ex-motocross champion we had run into a few days earlier. They got us to the tiny town of Coipasa for the night, where we got a taste of what was to come when we crossed ever deepening sections of soft sand. As the sun set, we got our first chance to ride on some salt. What should have been us rushing to get to the town before sunset turned into the first of many salt photo-shoots.

It is here that we stumbled across Alex’s extreme case of salt-phobia. He is completely terrified of getting the stuff on his bike because he suffers from a delusion where he thinks the bike will disintegrate within seconds of contact. He was so paralysed by fear, in fact, that he managed to drop his bike. Onto the salt. That must have been very difficult for him.

After rolling into Coipasa as it got dark, we were told to find the blue door, where there might be a room we could use for the night. An old lady let us in and allowed us to stay in a room that sees a lot of use as a shed. But there were beds and there was electricity so I was quite impressed. Water came from a well, though, and the entirety of Coipasa has no toilets. There’s just a field where everyone goes about their business. Yet somehow electricity is not a problem. I don’t quite understand that.

After raiding the lady’s little shop for dinner supplies, and being served some Bolivian Singani from a big jerry can, we tried to scrape some salt off our bikes so Alex could at least get some sleep. We then treated ourselves to some scrambled eggs on crackers. Mmm.

What followed was a day of two halves. While most of our kilometres would be on the two salt lakes, the area between the lakes is mostly soft, sandy, 4×4 tracks. It’s really tough. Your bike is in charge more than you are; it follows whatever track it wants, putting you off balance. Any correction involves steering input, which usually involves a fall and the two other guys getting off their bikes to help you up. Wash rinse and repeat. It required so much concentration from the three of us that Alex and I managed to lose Didier for a bit when we took one road and he took another behind us.

After spending some time on the horrible sandy road that connects the two lakes and then snakes around Salar Uyuni, Didier and I got tired of dealing with the road when there was perfectly good salt for us to ride on to our right. So we glanced at the arrow on the GPS, which was pointing right into the middle of the the vast, salty expanse, and headed for the horizon. There was a lot of swearing from Alex over the intercom as he was still suffering from his delusions about salt, before eventually he followed suit.

Riding on Salar de Uyuni is the opposite to riding on sand. It feels more like being on a Jet Ski than riding a motorbike. The throttle seems to control only noise level as there just isn’t anything to give you a sense of speed, and turning the bike seems to control the size of the person riding next to you but nothing else. The salt forms a giant white disc around you that is rounded as the earth curves away, disrupted only by small blobs of land that appear on the horizon. It’s often more than 50 kilometres before you reach any of them. The hexagonal patterns in the salt provide some much-needed perspective for any pictures that are taken here. And there were many.

The Salar is the main transport vein across the Altiplano, used by cars, trucks and buses alike, but when floating across this highway in the sky the size of Wales, you are almost always very far from anything else. We left the Salar as the sun dipped below the horizon, after which the moon took over, leaving the salt flat to glow into the night sky until dawn.

Having done my calculations expertly, I ran out of fuel 20 metres outside the Uyuni petrol station, which was just good enough to coast to the pump. A perfectly judged end to a perfect day on a perfectly flat bit of salt. Or at least Didier and I thought so. Alex just was looking forward to spending the next day dismantling his entire bike so he could get every last grain of salt out.